Cairo's coral-coloured Egyptian Museum, home to the Gold Mask of Tutankhamun and the world's largest collection of Pharaonic antiquities, marked its 113th birthday this week, but the anniversary was overshadowed by the country's economic woes. 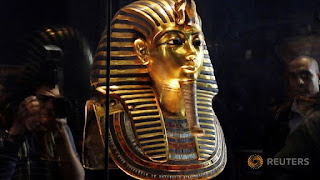 A golden funerary mask of King Tutankhamun is on display at the Egyptian Museum in Cairo February 16, 2011. REUTERS/Amr Abdallah Dalsh

CAIRO: Cairo's coral-coloured Egyptian Museum, home to the Gold Mask of Tutankhamun and the world's largest collection of Pharaonic antiquities, marked its 113th birthday this week, but the anniversary was overshadowed by the country's economic woes.

Tourism, a mainstay of the economy, has been hit hard since the 2011 revolution that overthrew veteran ruler Hosni Mubarak, with many of Egypt's renowned historical sites, from the pyramids at Giza to the Valley of the Kings in Luxor, suffering a decline in foreign visitors.

The Egyptian Museum, built in 1902, continues to stand proudly at the corner of Tahrir Square, which was at the heart of the 2011 revolt. But inside there are signs of decay, and waiting outside, the local tour guides are feeling the pinch.

"I really can't tell you how terrible the situation is," said Tarek El Kamaty, an Egyptologist and fluent English and German speaker who has been a guide for 20 years.

"Since 2010, the number of foreigners visiting is down 90 percent, maybe more. And worse for me, the Germans and English don't come at all, it's all Chinese and Indians now."

Now, he and the other guides say they are lucky if they get three or four people a day. El Kamaty says his income has fallen to 1,000-2,000 Egyptian pounds a month. The guides sit together in the garden of the museum, waiting forlornly for foreigners.

All of the guides have to earn a degree in Egyptology and then spend up to four years getting their licence from the state. There are around 40 working at the Egyptian Museum, one of the most visited sites in the country. Given that there are 16,000 guides nationwide, the museum is a plum spot.

"The only tourists who come now are Chinese and Indians. I'm too old to learn Chinese."

Inside, the vast museum is stacked with breathtaking treasures, with only a fraction of its 120,000 pieces, from ancient sarcophagi to Pharaonic figurines, on display.

But the collection is poorly lit, with little explanation, and some pieces are piled almost on top of each other. Window panes in the roof are smashed, paint peels from the walls and there is litter on the floor. The shop is empty.

"Like all museums around the world, we need funds," said Fatima Ahmed, the assistant to the director, Khalid al-Anani, who was recently appointed to run the institution.

El Kamaty and the other guides say what is needed is international support. He would like the British Museum and other world-leading establishments to lend expertise, help develop the museum and encourage Europeans to return.

"We need new lighting and better publicity. We should stay open until 10 p.m. and have a good shop," he said. "If I were the minister, that is what I would do."