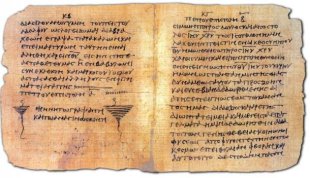 A papyrus containing a fragment of the Gospel of John was spotted by an academic at the University of Texas, who persuaded the seller to remove the item from the online shopping site and allow him to examine it.
"I thought, This can't be allowed to sell on eBay," Dr Geoffrey Smith said. "It will just disappear into a private collection." The seller agreed and Smith is set to present his research at the conference of the Society of Biblical Literature in Atlanta.
The artefact dates back to around 250 AD to AD 350 and contains about six lines of the Gospel of John on one side and an unidentified Christian text on the other. It is the only known Greek New Testament papyrus from an unused scroll rather than a codex – the emerging book technology that early Christians used for their texts, according to Smith.
The papyrus, written in ancient Greek, was in the private collection of Harold R Willoughby, a professor of early Christianity at the University of Chicago, who died in 1962. The seller, identified as a relative of Willoughby, found the papyrus after opening a suitcase of Willoughby's possessions that he had acquired in 1990 and stashed in his attic. The fragment, which was encased in glass, "literally fell out of a stack of letters", the seller said in a New York Times report.

"The fact that this one came to light on the Internet speaks to the reality for all of us who deal with manuscripts and antiquities," Dr Smith said. "We're all trying to come to terms with these things we study, our prized scholarly possessions, are now coming up for sale online."
Papyrus scrolls are sought-after items in the auction trade and on eBay. A fragment with 15 partial lines of Homer's epic poem The Iliad, written by a 4th Century Egyptian scribe purchased for £16,000 after fierce bidding. A fragmentary parchment sheet from the 3rd century AD of Paul's epistle to the Romans was bought at Sotheby's for £301,000.

The concern is that only rich buyers will be able to afford the rocketing prices of rare artefacts. "When private collectors acquire papyri for personal enjoyment and restrict scholarly access to them, the immediate consequence is that we lose valuable historical information that would otherwise advance our knowledge about ancient people," Brice Jones, a papyrologist and lecturer in New Testament and Early Christianity at Concordia University told the Telegraph.