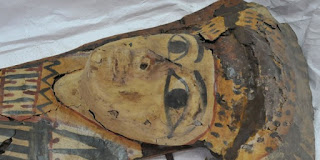 The Greco-Roman mask repatriated from Germany
By THE CAIRO POST

CAIRO: Egypt’s Antiquities Ministry said in a statement Wednesday it has received the 2,300-year-old mask that was repatriated from Germany.

“The mask was in possession of a German citizen who, according to his late mother’s will, decided voluntarily to return it back to the Egyptian cultural bureau in Berlin,” said Antiquities Minister Mamdouh al Damaty.

It dates back to the Greco-Roman Period (332 B.C-30 B.C.), Damaty said, adding that authenticity of the artifact was confirmed by an Egyptian committee of archaeologists.

“During the past four years, Egypt has recovered over 1,900 smuggled artifacts and is currently working on other cases in many European countries,” said Damaty.

The artifact will be renovated and displayed in the “retrieved artifacts section” recently founded at the Egyptian Museum in downtown Cairo, Chairman of Egypt’s Restored Artifacts Department Aly Ahmed told The Cairo Post Monday.

Egypt’s ancient sites have been targeted for thousands of years but the upheavals and the security lapse following the 2011 revolution have helped looters and tomb robbers target museums and several archaeological sites for treasures to sell on the black market.

“During the past four years, a third of Egypt’s archaeological sites have been either looted, exposed to agricultural encroachments or illegal building or experienced illicit digging,” world-renowned Egyptologist Zahi Hawaas said in a statement earlier this year.

He called on the current Antiquities Ministry to push for harsher punishment on antiquities crimes by changing the crime description from misdemeanor to felony.