Wadi Sarga at the British Museum

Department of Ancient Egypt and Sudan 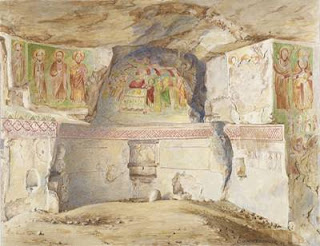 In Late Antiquity, the Monastery of Apa Thomas was established in abandoned stone quarries at Wadi Sarga located about 25 km south of Lykopolis (modern Asyut).

Active from about AD 600-800, the Christian settlement at Wadi Sarga provides an excellent case-study for the social function of monasteries during the period in which Christianity became the dominant religion in Egypt and Islam was introduced.

Large numbers of surviving literary and documentary texts on papyri (ancient paper) and other writing surfaces indicate that the population operated in a Coptic/Greek bilingual milieu, while pottery and other finds suggest the extent of trade and other social networks.

The collection of more than 2,800 objects includes stone funerary stelae, architectural elements, pottery, glass, textiles, Coptic ostraca, coins and other material from everyday life. Greek papyri and ostraca, and Coptic papyri are now in the British Library. A selection of objects remained in Cairo.

In 1913-14, R. Campbell Thompson excavated Wadi Sarga, three nearby cemeteries and a so-called villa on behalf of the Byzantine Research Fund.

As a result of the outbreak of the First World War, a full record of the excavation was never published. In 1922, a selection of papyri, ostraca and stone inscriptions were edited and published (P.Sarga), but the uninscribed objects and the documentation of the archaeological site, were not.

The project will make R. Campbell Thompson’s unpublished 1913-1914 excavation documentation and British Museum objects from the excavation available through printed and online publications.