How did Ancient Egyptians mummify a body?

As part of our 'History Extra explains' series, leading historians answer the burning questions you were too afraid to ask... 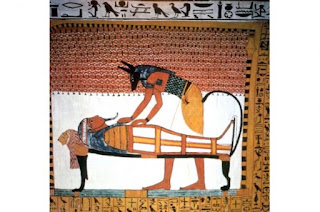 Anubis is the god of mummification. (Photo by Apic/Getty Images)

How did Ancient Egyptians mummify a body?

Egypt's undertakers employed different mummification methods at different times. Here are details of the classic method, as used on Tutankhamun.

The deceased was taken to the undertaker's workshop soon after death. The body was stripped, laid on a sloping table, and washed in natron solution (a naturally occurring salt used both as soap and a preservative).

The brain was emptied out of the skull via a hole made through the ethmoid bone (the bone separating the nasal cavity from the skull cavity). Next, an incision was made in the left flank, and the stomach, intestine, lungs and liver pulled out. These organs were preserved so that they might be buried with the mummy.

With the finger and toenails tied in place, the corpse was packed inside and out with natron and left for 40 days, until entirely dry. The desiccated body was then washed, oiled and packed with linen to restore its shape.

Wrapping was a long and complicated process, as the undertakers employed a mixture of bandages, linen pads and sheets to give the mummy a life-like appearance, and a mixture of charms and amulets, distributed within the bandages, to ensure its protection. Finally, the wrapped mummy was placed in its coffin.

Dr Joyce Tyldesley is a senior lecturer in the Faculty of Life Sciences at the University of Manchester, where she writes and teaches a number of Egyptology courses.