If you caught last week’s wonderfully ridiculous character posters for Gods of Egypt and found yourself wondering “What could possibly be better than this?”, the answer has arrived in the form of the first trailer. From director Alex Proyas, Gods of Egypt stars Gerard Butler as Set, the cruel god who ushered in an age of darkness after usurping the throne. When the young mortal Bek (Brenton Thwaites) enlists the help of another powerful god, Horus (Nikolaj Coster-Waldau), they lead a rebellion to overthrow the merciless king.

That sounds like your standard sword-and-sandals cinematic fare, but then you put it through the whacky lens of Proyas — the guy behind The Crow, Dark City, and Knowing — and you get something insane. Some of the effects actually look pretty great, and as you would expect from Proyas, it’s a visual treat. In fact, this is the most colorful and flamboyant he’s ever been. But then there’s some of that dialogue and this reaction shot, and oh boy is this shaping up to be an utterly ridiculous gem.  Check it out for yourself below.

Dave astutely quipped that the posters resembled OG Lisa Frank, and indeed this trailer could have been lifted from the pages of my trapper keeper. Gods of Egypt looks exactly how 11-year-old me would have envisioned a film about Egyptian mythology, which is to say glitzy and epic with all the superficial trappings and absolutely no deeper knowledge or understanding of the culture or mythology. And of course it’s the Exodus debacle all over again — the leading men are lily white with horrid tans and inexplicable English accents. It’s never a good idea to judge a film by the trailer, but all signs indicate this movie will be goofy as hell and I will absolutely love it.

Here’s the official synopsis for Gods of Egypt:

Magic, monsters, gods and madness reign throughout the palaces and pyramids of the Nile River Valley in this action-adventure inspired by the classic mythology of Egypt.  With the survival of mankind hanging in the balance, an unexpected hero takes a thrilling journey to save the world and rescue his true love.  Set (Gerard Butler), the merciless god of darkness, has usurped Egypt’s throne, plunging the once peaceful and prosperous empire into chaos and conflict.  With only a handful of heroic rebels opposing Set’s savage rule, Bek (Brenton Thwaites), a bold and defiant mortal, enlists the aid of powerful god Horus (Nikolaj Coster-Waldau) in an unlikely alliance against the evil overlord.  As their breathtaking battle against Set and his henchmen take them into the afterlife and across the heavens, both god and mortal must pass tests of courage and sacrifice if they hope to prevail in the spectacular final confrontation. 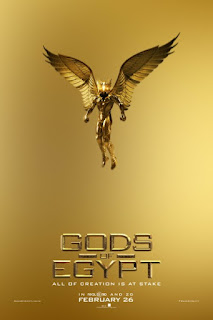