Issaquah native makes herself, and others, at home in Egypt and the Middle East : The Issaquah Press – News, Sports, Classifieds and More in Issaquah, WA


Issaquah native makes herself, and others, at home in Egypt and the Middle East

Genevieve Hathaway, 32, has heard the following phrase, or something very close to it many, many times: "It must be so scary in the Middle East as a woman, by yourself."

"There's so much misrepresentation in the news," she added. "These are people who want you there and want to show off their country. … It's not all terrorists." 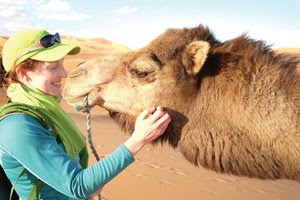 Contributed
Issaquah native Genevieve Hathaway has a degree in Egyptology and has founded a tour company specializing in taking women around the Middle East.

An Issaquah native, Hathaway launched ArcheoAdventure Tours in 2014. The tours offered are aimed specifically at women visiting the Middle East. She uses only female tour guides, and tries to solicit only female-owned hotels and female-owned restaurants.

"We believe in empowering local women through good employment, making them equal wage earners in the family," Hathaway said.

ArcheoAdventure Tours started out modestly this year with a trip to Egypt. Hathaway plans trips to Egypt, Morocco and Turkey next year. In 2017, Hathaway hopes to take her enterprise to Jordan.

Not incidentally, although somewhat accidentally, trips to Morocco will include visits to the mountain town of Chefchaouen, Issaquah's sister city. However, Egypt is sort of Hathaway's home away from home.

"I've always been fascinated by ancient Egypt," she said.

In 2003 and 2004, Hathaway was studying Egyptology at American University in Cairo. She said many of the top Egyptologists in the world teach at the school. Later, she watched on TV and read in the news as the events of the Arab Spring shook Egypt and other Arab nations. In Egypt, many of the revolutionary protests took place on Tahrir Square ("Freedom" Square in Arabic) where she had gone to classes.

Hathaway was in the region working primarily as a photographer when a friend asked if she would like to help start a tour guide company in Egypt. She quickly accepted the offer, although Hathaway herself cannot act as a tour guide. The Egyptians insist locals guide the tours, not foreigners.

Hathaway also got involved in documenting the street art in and around Tahrir Square. Her photographs have been on exhibit in Seattle.

As for being a woman alone in the Middle East, Hathaway insists it's not a problem.

"It's fine as long you don't go to Sinai or the western desert," she said.

Except in three countries, women do not have to cover their heads. In fact, it's frowned upon unless you're a Muslim. Women are expected to dress modestly and perhaps act a bit more formally – don't smile at men you don't know, for example.

"It could easily be misinterpreted," Hathaway said.

Hathaway said she discovered Issaquah's sister city, Chefchaouen, by accident. She was touring Morocco when she came across the small but somewhat affluent mountain town. As is common in parts of the Middle East, the city largely is painted one color, in this case, a light blue. The color is supposed to represent a mixing of the deep blue symbolizing Arab culture and the white representing Jewish culture.

"It's beautiful," Hathaway said, "especially at night when they turn the lights on and the city just sort of sparkles."

Although she instantly loved the place, Hathaway didn't realize at first that Chefchaouen was a sister city to her hometown. A friend pointed the fact out to her. A blue door from Chefchaouen sits near the Issaquah police station on Sunset Way. A Chefchaouen municipal building holds a salmon sculpture. Hathaway didn't get to see it as the building was closed for a holiday when she was there.

Hathaway has visited 10 or more countries in the Middle East and North Africa. She is trying to win her way into Iran. And Hathaway insisted that she has never felt threatened as an American.

"There has been some harassment as a woman," she said. "But the same thing happens to me in New York City."