Egypt News - Hotel in Sinai bombed by militants, many killed

Hotel in Sinai bombed by militants, many killed 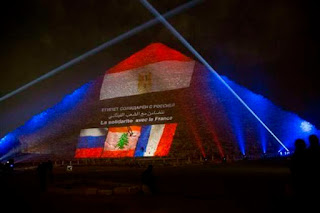 The attack on Tuesday evening involved a suicide bomber who drove a car into the Swiss Inn hotel in the provincial capital al-Arish. Security forces tried to stop him but he opened fire, causing the car to explode, the military and a witness said.

The suicide attack was followed by a gunman who entered the guest house area where judges overseeing a parliamentary election were staying in the coastal city. Then a third suicide bomber detonated a suicide vest in the kitchen of the hotel.

Witnesses said that the heavily armed militants were able to penetrate a heavy security ring thrown around the hotel where judges were staying to monitor the polls which is an important political milestone for the government of President Abdel Fateh el-Sisi.

"A brother ... seeking martyrdom hit with his car bomb the security force protecting the Swiss (Inn) hotel where 50 judges were staying, only to be followed by a lion ... who broke into the judges' base with his automatic weapon ... then blew up his explosive belt among them," Sinai Province said in a statement circulated by its followers on Twitter.

A military statement read: "This brutal incident is a failed attempt to hinder the state from building its institution but we assure all that it will increase the drive and insistence of the armed forces and the Interior Ministry to weed out the roots of terrorism in North Sinai."

The group has carried out similar attacks in the region as part of its bid to topple the Cairo government.

Last month, the Islamic State-affiliated group claimed responsibility for bringing down a Russian plane carrying tourists from the resort of Sharm el Sheikh, killing all 224 people on board.

They were also behind a bombing at a police club in El Arish this month that killed four officers.

The Egyptian authorities have also repeatedly said that the Sinai militants are on the retreat. However, the attack on Tuesday occurred despite the deployment of thousands of police officers and soldiers to protect the parliamentary election.