The Egyptian flag, the French flag and France's national colours of blue, white and red are projected onto one of the Giza pyramids, in tribute to the victims of the Paris attacks, on the outskirts of Cairo, Egypt.

CAIRO - The Great Pyramid in Egypt was bathed Sunday in French, Lebanese and Russian colours in homage to the victims of attacks in Paris and Beirut and the Sinai plane crash.

The Great Pyramid of Khufu, the only one of the Seven Wonders of the ancient world still standing, was illuminated by projectors reproducing the flags of France and Russia and the green cedar of Lebanon.

Young Egyptians were staging an overnight candle-lit vigil at the foot of the more than 4,500-year-old giant monument on the Giza plateau on the outskirts of Cairo.

The tourism and antiquities ministries organised the ceremony to "mourn the innocent lives lost around the world", paying tribute "to the victims of the crash of the Russian airplane and attacks in Lebanon and France".

On Thursday in Beirut, twin bombings claimed by IS killed 44 people in southern Beirut, a stronghold of the Shiite Hezbollah organisation that backs the embattled Syrian regime.


In Dubai, the world's tallest building the Burj al-Khalifa was lit up Sunday in the colours of the French national flag.

Elsewhere in the Gulf, Kuwait City's landmark towers were also illuminated in the red, white and blue of France. 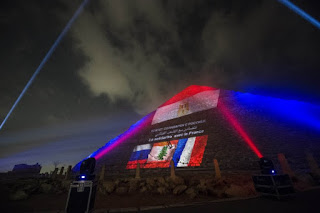