Adventures with Tintin: The secrets behind the man and his little white dog that stole the people of Brussels' hearts | Daily Mail Online


Adventures with Tintin: The secrets behind the man and his little white dog that stole the people of Brussels' hearts

By Max Wooldridge For The Mail On Sunday

It’s an overcast Sunday morning down a back street in the Marolles district of Brussels.

A cat peers down from a balcony. The tyres of passing cars sound punctured against the cobbled street.

‘Snowy jumps from this window in an early scene in The Secret Of The Unicorn,’ says a voice beside me. ‘Tintin has been chloroformed and taken out in a packing case.’ 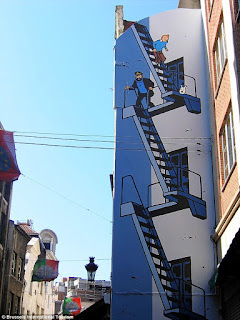 Max said: 'In the book, Tintin buys a couple of walking sticks here for the series’ bungling detectives Thomson and Thompson and, on the hunt for a present for his friend Captain Haddock, he finds a model ship called the Unicorn'

I’m looking at an apartment on Rue Terre Neuve with Michael Farr, author of several excellent books on Belgium’s famous boy reporter and comic-book hero and his faithful white dog, and the leading British authority on his creator, Hergé.

He knows his stuff so well that when a contestant on BBC’s Mastermind chose Tintin as their specialist subject, Farr was asked to set the questions.

‘This street was the inspiration for Tintin’s apartment in his first few adventures,’ Farr says. ‘In the books it’s 26, Rue de Labrador.

Soon we are perusing antiques at the nearby flea market on the cobbled square of Place du Jeu de Balle. This is the market Hergé depicts at the start of The Secret Of The Unicorn in his 1942 book and the recent Steven Spielberg film.

In the book, Tintin buys a couple of walking sticks here for the series’ bungling detectives Thomson and Thompson and, on the hunt for a present for his friend Captain Haddock, he finds a model ship called the Unicorn. 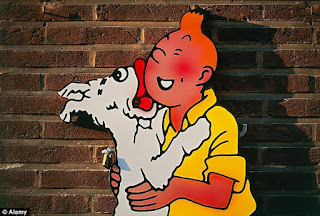 On a news stand, a paper displays headlines about the migrant crisis. ‘All the Tintin stories reflect news events,’ Farr tells me. ‘Whether it’s drug-smuggling or people-trafficking. The adventures still have a modern relevance. 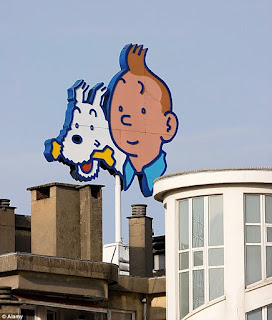 Large figures of Tintin and Snowy on top of the Lombard building, once the offices of Hergé’s publisher

My Tintin adventure begins several hours earlier, as soon as we arrive at Brussels Midi station, in fact. On the concourse, a large black-and-white scene from an early book, Tintin In America greets us: Tintin in cowboy gear clings to the side of a hurtling locomotive.

‘Hergé is finding his artistic style in these early adventures,’ Farr says. ‘He’s becoming sure of his techniques. The books were translated randomly not chronologically. Read them in order and you can see Hergé’s drawing style evolving.’

As we leave the station, Farr’s splendid Tintin tie starts to flaps in a chilly breeze, and I notice his Burberry raincoat is remarkably similar to that of his hero. Suddenly he points skywards, to large figures of Tintin and Snowy on top of the Lombard building, once the offices of Hergé’s publisher.

Soon we are darting around central Brussels in Tintin’s footsteps. We pass the Metropole Hotel, on a tree-lined stretch of Place de Brouckère, which appears in the background of The Seven Crystal Balls. Then it’s on to the Parc du Cinquantenaire, the stately Brussels park that appears early on in King Ottokar’s Sceptre.

Later, Farr points out that one of the books’ most memorable characters – the absent-minded scientist, Professor Cuthbert Calculus – is honoured with his own street name, with a plaque under the sign for Rue Charles Buls.

On a news stand, a paper displays headlines about the migrant crisis. ‘All the Tintin stories reflect news events,’ Farr tells me. ‘Whether it’s drug-smuggling or people-trafficking. The adventures still have a modern relevance. 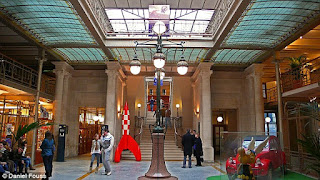 Big Draw: The Hergé Museum, which is dedicated to the Tintin artist, sits outside of Brussels

‘Tintin In America criticises capitalism, telling how native Americans are driven off their lands when oil is discovered.

‘In King Ottokar’s Sceptre, published in 1938, Tintin works to defeat a coup – it was an allegory of the Anschluss, Hitler’s annexation of Austria.

‘And The Red Sea Sharks was based on news stories Hergé saw about Africans making the trip to Mecca and being sold as slaves.’

Suddenly Farr overhears a couple speaking in the local Brussels dialect. ‘Ah, Brusselois!’ he exclaims. ‘Hergé sometimes used this for foreign languages in his books. It may look like mumbo-jumbo on the page but it’s terribly witty if you’re from Brussels, or you understand what he’s on about.

The books work on two levels. Children love the exciting action and adventures, and the highbrow references appeal to older readers – if they get them!’

Before lunch we drive east of Brussels to the Hergé Museum in the university town of Louvain-la-Neuve. If you take the train it’s a 50-minute journey from Brussels Central station. The museum is a striking, angular building which resembles a huge ocean liner that has run aground in a forest. It displays all of Hergé’s work. Not just Tintin, but his advertising work and other creations.

Farr is convinced that if Hergé hadn’t created Tintin, he would have made his fortune in advertising. Aptly, during our visit, the museum is full of blue-shirted local Boy Scouts: Hergé’s boyhood love of the scouting movement partly inspired Tintin’s creation. 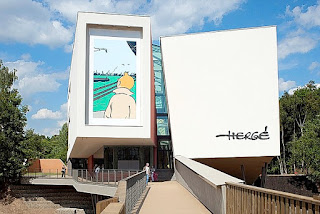 The Comic Strip Centre sits in the city, where there are more Tintin exhibits shattered around 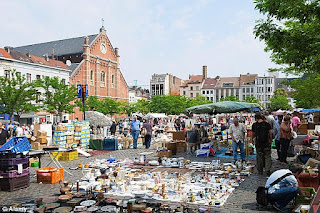 Max said: 'Soon we are perusing antiques at the flea market on the cobbled square of Place du Jeu de Balle'

We grab a quick lunch in the museum’s cafe. Above us hang illuminated covers of Le Petit Vingtième, the children’s newspaper supplement where the Tintin cartoon strip first appeared. On nearby tables bored-looking children count the minutes until they can be unleashed into the museum shop.

Farr, a former foreign correspondent for news agency Reuters, knew Hergé, first meeting the artist in 1978 when he worked in Brussels covering the European Parliament. That summer, when the politicians went on holiday, Farr decided to pursue a subject closer to his heart.

‘Hergé was notoriously reclusive but eventually I persuaded him out to lunch.’ They met at Comme Chez Soi, a Michelin-starred restaurant located in an art nouveau building on Place Rouppe, which is still there. The wine list features images of drunken Captain Haddock and Snowy.

‘He was 71 when we met, but looked about 51,’ Farr recalls. ‘He loved good food and wine but he was in excellent shape. I asked him about his life and Tintin, but he wouldn’t answer questions about himself. He wanted to talk about Pink Floyd! Hergé was the most modest man I’ve ever met. He had this wonderful humour and charm.’

Farr was later posted to Bonn but the friendship forged with Hergé in Brussels meant he was allowed access to the artist’s archives after his death.

The Hergé Museum, which opened in 2009, is a phenomenal celebration of his art, with a huge amount of original work on show that previously had been held in bank vaults and archives. Interactive displays include a circular room lined with Tintin books, where readers gather to enthuse about their favourites. 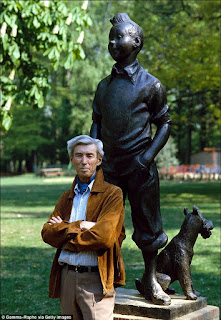 Herge stands in front of a Tintin statue on May 13, 1982 in Brussels, Belgium - the year before he died

Stylish displays identify the real-life inspiration for characters including Professor Calculus. There’s a feature on Hergé’s brother, Paul Remy, the model for Tintin physically. The museum brilliantly traces the evolution of Hergé’s technical artistry, from his early newspaper strips to the clear line drawing style of the books. It deals expertly with his interests and fascinations, such as Egyptology and moon exploration.

Hergé started his research on sending Tintin to the moon as early as 1948. The subsequent book, Destination Moon, was published in 1954, some 15 years before the real lunar landings.

Farr says Hergé’s attention to detail was exceptional. He says: ‘An Egyptologist friend of mine says all the hieroglyphics in Cigars Of The Pharaoh are right. It’s remarkable.’

Before we leave the museum, our guide Marc Vanhacter tells us Hergé has brought the world to generations of young Belgians, and beyond. ‘Tintin captured our imaginations and allowed us to travel the world and beyond, to America, Africa, Egypt, India, Tibet, Africa, South America – the Moon.’ 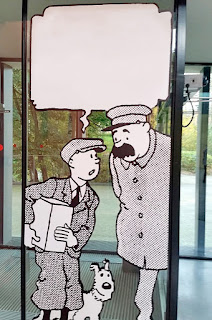 'We are soon back in the Belgian capital, spotting images of Tintin around nearly every corner' said Max

On the way back to Brussels, we make a brief stop in the nearby village of Ceroux-Mousty, and the 16th Century farmhouse where Hergé lived in the 1950s. The road it stands on has been renamed Rue Hergé.

We are soon back in the Belgian capital, spotting images of Tintin around nearly every corner. But the 20 or so murals across the city are no match for what greets passengers at the end of the line on the Brussels Metro. At Stockel station, the easternmost stop on Line One, there are marvellous end-to-end murals of 140 Tintin characters down each platform. Don’t miss it: never has waiting for a train been so much fun.

‘The murals are a way of keeping Tintin alive,’ say Farr. Brussels bureaucrats may come and go but Belgium’s comic-book hero will live for ever.

We can’t leave Brussels without visiting the Belgian Comic Strip Center in the Rue des Sables, sited in a former Art Nouveau warehouse designed by Belgian architect Victor Horta. There is a stone bust of Tintin in the hallway and models of him and Captain Haddock in orange spacesuits halfway up the stairs.

Naturally, the souvenir shop at the Brussels Eurostar terminal is full of Tintin merchandise and Farr tells me to look closely at the cover of Destination Moon which is displayed prominently. ‘There’s a mistake,’ Farr says. ‘Professor Calculus is driving a jeep, but the steering wheel has been left out.’ He explains that the cover was completed and signed off when Hergé was away on holiday.

‘He was very upset by that. He was such a perfectionist. He hated any mistakes,’ Farr says.

Back at St Pancras Station in London, my perfect Tintin adventure comes to an end. At least I can look forward to visiting a free Tintin exhibition that opened last week at Somerset House on the Strand. It runs until January 31, and will include a Snowy lookalike competition.

While I head home, Farr continues his Tintin adventures. He is off to Scotland on the trail of The Black Island – this time in the company of the Swedish Tintin Society.

‘The Swedes are big Tintin fans,’ Farr says. ‘It must be the long winters!’

Hotel Amigo (roccofortehotels.com) has Tintin-themed rooms from £202 including breakfast and offers a Tintin package for up to two adults and two children for £38 which includes tickets to the Musée Hergé, a soft toy, Tintin comic and Tintin map of Brussels.

Eurostar (eurostar.com) offers return fares to Brussels from £72. Rooms at the Travelodge, Kings Cross Central start from £49 per night (travelodge.co.uk). For further information on Brussels and Belgium, visit belgiumtheplaceto.be.