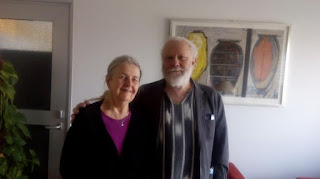 Forty years ago, a newly-married Finnish couple came to Egypt to spend their honeymoon. At the time, Egypt was one of the most popular tourist destinations with its old archaeology books having promoted the country’s ancient civilisation and history worldwide.

When Ilkka and Vappul Taipale first came to Egypt, they went on a tour of Cairo and Luxor. They still cherish these memories.

To celebrate their 40th anniversary of marriage, the Taipales decided to return to Egypt and reserve the same room at the same hotel.

Although the Egyptian political, social and cultural situation has radically changed over the past 40 years, Ilkka and Vappu see many similarities, noting that Egyptians are still generous and welcoming despite of all the changes imposed by the Egyptian reality.

”We love walking in the streets but we noticed too many cars and shops instead of bazaars. Actually, the traffic and transportation system was quite easier in the past.” Vappu said. Sharing a fondness for Egyptian cuisine, the Taipales expressed their love of lamb, kofta and kebab.

Vappu and Ilka met for the first time in the medical school in Finland. The couple came with one of the first Finnish tourist groups to Egypt in 1966. ”We were interested to spend our honeymoon in Egypt because my mother was fond of archaeology. Even though she was a nurse, she had many books about Egypt and Ilkka’s father, who was a chemist, also had visited Egypt before and told us about it,” Vappu added.

During their recent stay, the couple met with representatives for many Egyptian NGOs as they believe that NGOs play a crucial role in fostering social cohesion. ”In Egypt, you have some heart and lung associations. You also have trade unions which are very important. NGOs are promising in Egypt and we hope they will be more promising in the future,” Ilkka said.

Ilkka owns the fifth big publishing house in Finland and he is internationally known for his book 100 Social Innovations from Finland that was translated into many languages, including Arabic, and was internationally distributed. With his knowledge of the international publishing sector, Ilkka spoke about the general availability of books in Egypt and their importance for education.

”Paying more attention to the public libraries is another important factor. In Finland, each association and every school has big libraries and you can order a specific book from a place and receive it from another because we have a strongly connected network,” Ilkka added.

The declining numbers of books in circulation in the Arab world astonished Ilkka who wondered how Arabs, once the leaders of civilisation historically, do not have access to books.

”When we have a book fair, about 70,000 readers come to buy books. I believe it’s a mutual responsibility between both the government and the civil society and the extent to which they care about reading, culture and knowledge. The Finnish literature association helps a lot with that,” he noted.

In his opinion, Egyptians must collect Egyptian innovations in a book, mixing science with a sense of humour, pointing to the example of Iran’s recent initiatives.

“Unfortunately, there have not been enough connections between Egypt and Finland during the past decades and thus, the Arab language isn’t a very well-known language and even the external export and import is quite low. We have more active connections with Tunisia, for example,” he said.