Long before the Ancient Egyptians rose to their glory, the first glimpses of a successful state were budding in Lower Nubia – then known as Wawat – the land which stretches between the first and second cataracts of Aswan. As early as 5000 BC, many Africans of mixed origins came together around the Nile to form what later grew into the powerful and influential kingdom of Nubia – the kingdom whose kings later ruled Egypt for no less than 75 years.

Today, however, the descendants of those kings suffer the fate of marginalization by the Mediterranean majority which inhabits Egypt. But as they continue to fight for their political, societal and legal inclusion, many individual and institutional initiatives prove that safekeeping the Nubian culture is core to safekeeping an integral part of the authentic Egyptian identity.

Stemming from the zeal to remind the local and international communities of the Nubian culture and the invaluable importance of reviving it, Jareedy, the first ever Nubian film, participates in the fifth edition of the Luxor African Film Festival taking place on 17-23 March.

Directed by Mohamed Hisham and written by Gamal Salah, Jareedy captures the untold tales of Egypt's Nubia in a language that is starting to wane under the influence of neglect, marginalization and mainstream power. Taking pride in the Nubian language, which is considered one of the oldest living languages, Hisham describes how he found it fitting to narrate the aching tales of Nubia in its mothertongue. However, the further he ventured into his unique filmmaking experience, the more he grew certain that the preservation of the Nubian culture is a responsibility that is equally bestowed upon all Egyptians.

"As I sat with the Nubian elderly to translate the script from Arabic to Nubian, I noticed how there was difficultly translating it, and how they would sometimes disagree on the proper translation," says Hisham. "This made me wonder, if those are the elderly, then certainly with the younger generations, the language would get weaker and weaker until it disappears. So I felt that the script has got to be presented in Nubian no matter how hard this step is."

Jareedy, which means a small boat that Nubian boys make out of basic material, revolves around a little Nubian boy, Konnaf, who dreams of conquering his fear of the water and reaching a rock in the middle of the Nile. As he continues to struggle with his fears, Konnaf finds guidance in Abraz, an old craftsman who takes him on a Jareedy ride.

"The idea of the child's dream which the movie revolves around mimics my own dream for making this film," says Hisham. "In spite of the challenges that I faced along the process, I kept following the sound which told me to present the film in Nubian.

"No one knows where the ideas come from. It's often like a waft sent from the universe. It originates from one's immersion in the surroundings. I saw the Jareedy, and to me, it resembled that thing which one uses to overcome his fears," adds Hisham. "When the goal manifests, challenges start to arise."

Adding to the exquisiteness of the experiment, Hisham worked with a cast of actors who had never been in front of a camera. "Nubians are by nature artists, and so the idea of filmmaking in Nubia seemed quite plausible," says Hisham. "It was, of course, challenging to guide and direct the actors, but they were quite responsive." To overcome the language barrier of him not speaking Nubian, Hisham recorded the entire script in audio notes which he used in directing and guiding the actors. "While we were on set, some passersby would even suggest alternatives to the translation to make sure we got the most accurate phrasing." 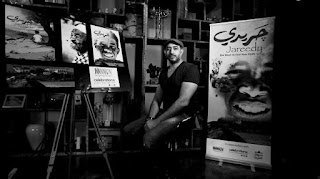 Driven by the success of Jareedy, Hisham looks forward to his upcoming project, which is set to take place in the Siwa Oasis located in Egypt's Western Desert. Replicating the Jareedy experience, Hisham opts for making his next film in Tamazight language which the Siwi locals use.

"Experiments like this one show to people that we do not overlook them or their culture," says Hisham. "They are a part that cannot be separated from the Egyptian culture."