Results of Tut tomb scan to be revealed Thursday: Damaty 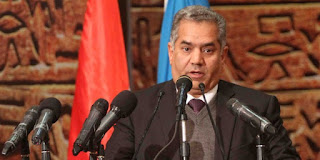 CAIRO: The results of the radar survey of the tomb of King Tutankhamen will be revealed in a news conference Thursday; Antiquities Minister Mamdouh al Damaty was quoted by Youm7 Wednesday.

In late November, a Japanese team of radar specialists started a non-invasive radar survey on the pharaoh’s tomb to verify the British archaeologist Nicholas Reeve’s theory suggesting that Queen Nefertiti’s crypt may be hidden behind King Tutankhamen’s tomb in the Valley of the King in Luxor.

“There is, in fact, an empty space behind the wall based on radar, which is very accurate, there is no doubt,” head of the Japanese team Hirokatsu Watanabe said in a news conference in late November.

Reeves’s theory was developed after he examined ultra-high resolution images published by Factume Arte; an art replication establishment that created a facsimile of Tutankhamen’s burial chamber in 2014.

In the images, Reeves noted some cracks in the northern and eastern walls of the tomb. He suggested they mark two passages leading to Nefertiti’s tomb that were blocked, plastered and painted.

“The construction of Tutankhamen’s tomb was not completed when the young Pharaoh unexpectedly died at the age of 19, thus the tomb of Nefertiti who had died 10 years earlier, was partially adopted for Tutankhamen’s royal burial,” Reeves said briefing his theory to reporters at the Egyptian State Information Service (SIS) in September 2015.

Among the other clues is that neither the tomb nor the mummy of Nefertiti has been found.

If the scholars were able to prove their theory, “this would be a new step that could lead us to a most significant archeological discovery in the 21st Century,” he added.