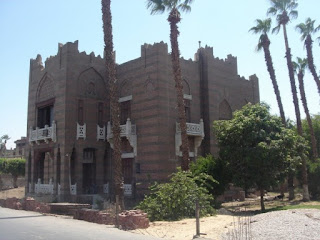 The seized relics, includubg 39 forks, candlesticks, spoons, and a hand-made tray all made of silver, were found in the possession of a train passenger at Naga Hammadi train station, 500 kilometers south of Cairo.

Preliminary investigations revealed the objects were among 242 antiques stolen from the historical palace in Dec. 2014. The palace was looted by unidentified assailants who broke into the main gate of the Haramlek and three rooms on its second floor Friday early morning, media coordinator of Egypt’s Heritage Saving Campaign Mohamed al-Sadek told the Cairo Post.

The looted artifacts are the personal belongings that have been collected through Kamal’s travels, said Sadek.

Following the incident, the Antiquities Ministry has assigned a special committee with examining the palace and submitting a report with the details of the losses, Mohamed Amin from the Islamic and Coptic Antiquities Dept. told The Cairo Post in Dec. 2014.

“The looted artifacts are registered in the Antiquities Ministry’s archives for Islamic and Coptic antiques and that will make it difficult for the assailants to sell them and easier for tourism and antiquities policemen to track them, said Amin.

Egypt’s political turmoil since the January 25 Revolution in 2011 and its consequent security lapses left much of the country’s cultural heritage vulnerable to looting. In spite of the efforts of the Egyptian government in tracking smuggled artifacts inside Egypt and in auction houses abroad, many items are unaccounted for.

Prince Youssef Kamal (1882-1969), an explorer, visual artist and antiquity collector, was the grandson of Ibrahim Pasha, the military leader and son of Mohammed Ali (1805-1849.) He collected over 2,000 antiques from all over the world and had donated them to the Egyptian government after the 1952 Revolution, Islamic and Coptic history Professor Fathy Khourshid told The Cairo Post.

Kamal was also the founder of the first school of the fine Arts in Cairo, said Khourshid.