The legendary bookseller of Cairo 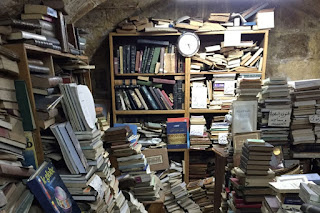 Cairo this year has not seemed a good place for research. The city has been marked by closed doors and death. The doors to the Townhouse Gallery downtown were mysteriously shut by the authorities at the end of last year and in early February Italian researcher Giulio Regeni was discovered dead just off the Cairo-Alexandria Desert Road. It was with a certain trepidation that I arrived in Egypt.

Every time I come to Cairo, one of the first things I do is make my way to the 18th-century Takiyya (Sufi lodge) of Sultan Mahmud. There, in the basement of this Ottoman building, whose cells are now being used as offices for the Ministry of Antiquities, is Mustafa Sadiq’s bookshop. It was my PhD supervisor, Marilyn Booth, who first introduced me to Mustafa, the self-styled ‘friend of researchers’, whose bookselling business goes back to his great-grandfather, making it one of the oldest still running in Cairo. He is a legendary figure among academics and his name is a common feature of the acknowledgement sections of scholarly books on Egypt. He has counted former grand mufti of Egypt, Ali Gomaa, among his customers. If you are interested, he can be glimpsed briefly (with his books) in the documentary Uum Kulthum: A Voice like Egypt.

Our routine goes as follows. I turn up in the early afternoon if it is winter, or in the evening when the summer days are too stifling for business. I greet Mustafa, who sits on a chair at the front of the shop or is putting out books for display. As soon as he sees me he orders coffee from the local café. We talk for a while and he tells me if he has any exciting new things in. Once the coffee has arrived I go downstairs and begin to dig through the shop.

Downstairs is a small vaulted room with books piled from floor to ceiling in the traditional Arabic way: not horizontally along the shelves, but vertically one on top of the other. I then spend an hour examining these stacks and transferring their layers of dust on to my hands. Starting on the piles that Mustafa has set out for me, but soon disappearing into other neglected corners of the shop, I pick out a haul of books to buy. The clutter of my desk is testament to the range and quantity of Mustafa Sadiq’s stock. As well as a glut of books on Egyptian theatre and Sudanese literature I have found 19th-century books on agriculture, a French manual of classical erotology, and a collection of poems about trams. Once, behind a stack of books, I found a jar containing a large pickled fish; I did not buy it.

If you stay an hour in the shop, several other customers will come and go; some to sell their books and others to buy. Two schoolboys once came in looking for a particular book of medieval magic. Hoping to put them off, Mustafa said he could get it for 200 Egyptian pounds. When he saw them mentally calculating whether they could get it together he told them to go and do their homework. After a man was arrested for carrying a copy of Orwell’s 1984 this was where people came to look for a copy.

This time, I made the walk towards Sultan Mahmud’s Takiyya only to find the door of the bookshop bolted with a large padlock (a common sight in Egypt at the moment). Mustafa’s brother Ahmed has an antiques shop next door, so I went to talk to him. When I asked about his brother he looked down for a second. He told me that Mustafa had passed away exactly 40 days ago – he had been very ill. He suggested that I come back in a few days and he could open up Mustafa’s shop. Though it seemed slightly mercenary, I agreed.

The following Wednesday evening at 7pm, I turned up at the shop. Ahmed told me that it was the first time they had opened it up since Mustafa’s death. In the entrance stood the table where we used to share coffee. Against it leaned Mustafa’s cane. Ahmed apologised for the mess inside: he had not had time to tidy up. Still, it seemed to me neater than ever before. Perhaps it was just emptier without Mustafa, more sterile.

It didn’t feel quite right to be buying anything, but since the shop had been opened for me I picked out a typewritten copy of a set of lectures given at the Egyptian Cultural Centre in London from 1942 and a translation of Euripides’ Ion into Arabic. It felt like an insufficient tribute to the man who made my life in Egypt and that of so many researchers more productive and more pleasant. At a time when the death of a young Italian scholar is still fresh in people’s memories and doors seem to be closing all around, the death of the ‘friend of researchers’ feels like another great loss.

From the April issue of Apollo: preview and subscribe here.