Game Review: Pharaoh Rebirth+: "It's all rather ridiculous, but it works."

No, I don't play computer games, but the description of this one is a hoot.

Sometimes a game requires a second look before you realize how great it could be. This was certainly the case with Pharaoh Rebirth, a title I might have dismissed entirely had Jonathan Holmes not sent the Dtoid staff an e-mail saying, "Best new video game, it's been here all this time and we just didn't know it."

So I gave it a chance, and after watching the trailer I immediately knew I needed to play this thing. Egyptian mythology and cute animal mascot characters are definitely relevant to my interests, and after getting a taste of the combat mechanics and insane-looking bosses, I was ready to dive right in.

Thankfully, Pharaoh Rebirth did not disappoint.

\ We've blogged about this before: read (1) back stories 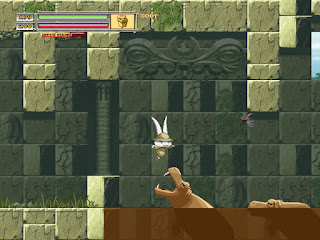 Pharaoh Rebirth follows the adventures of Dr. Jonathan Banfield, an archaeologist of questionable competence who was transformed into a rabbit after being cursed on a previous expedition. The story begins with his discovery of Amshear, the legendary oasis of Egypt, where he and his nemesis, Andre Betancourt (who was turned into a turtle by the same curse) are hunting for relics. The pair uncover an ancient sarcophagus, and after Andre brashly opens it, they once again fall victim to another curse. This time, the evil entity, Sehur I, curses them to die in seven days. Their only hope is to become immortal by collecting seven holy grails scattered across Egypt.

The story starts out strange enough, with an anthropomorphic rabbit and turtle fighting over ancient Egyptian treasures, and only more bizarre from there, with mysterious old men, wandering billionaires, and the United States Department of Defense eventually getting involved. It's all rather ridiculous, but it works, and there are some great twists and turns along the way that I never would have expected. It's also sports some particularly witty dialogue to help keep the bizarre story from taking itself too seriously.

In terms of gameplay, Pharaoh Rebirth is best described as an action platformer with some Metroidvania elements mixed in. Levels are divided into individual stages that are chosen from a selection screen, but any of them can be revisited later once you discover new abilities and upgrades that allow you to reach previously inaccessible areas. And don't worry, even though Jonathan only has seven days to complete his mission, that doesn't mean the player has a time limit. Going back to old areas won't deplete any of your time.

As a rabbit, Jonathan uses his long ears to escape trouble. He can use them to whip enemies, block projectiles by spinning them around, grapple onto certain objects, and float gracefully through the air by turning them into a “paper” airplane. He can also find several sub-weapons hidden throughout Egypt to help him fight, including a machine gun that shoots tennis balls, a box of soot that can be thrown into the air to cause boils, a floating mummy familiar, and the scythe of Anubis.

There's a nice variety of enemy types to fight, but the really interesting combat happens during boss encounters. These require the player to manage the different sub-weapons, choosing the best weapon for the job, while also attacking normally, dodging, and defending. Air attacks are particularly useful here. They don't do as much damage as ground attacks, but chaining together multiple aerials will actually replenish Jonathan's health. A lot of the bosses are quite visually impressive as well, like Andre's helicopter, the giant scorpion, and the final boss, but even the smaller ones are a ton of fun to fight as well. 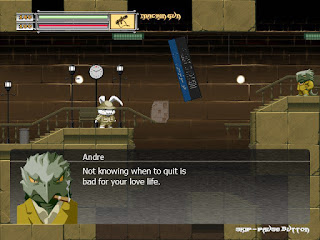 Including the sub-weapons, there are tons of collectible items to find while exploring the ancient ruins and other locations. Some are consumables, such as carrots to temporarily increase strength, udon noodles to recover health, and wine to replenish the sub-weapon meter. Others are treasures, which might permanently increases stats, grant new abilities, or do nothing at all other than fill out Jonathan's collection. These items are often found in secret areas, hidden behind false walls or other hard-to-reach places.

A lot of the items are apparently very well hidden, as I've searched and searched and only found about 75% of the collection. In this respect, it would have been nice if there was some kind of indication of how many items were left in each level. Perhaps the maps could have also included information about items that were discovered but couldn't be reached yet, or blocks that could be destroyed, among other things. I've always felt these sorts of things should be crucial additions to any Metroidvania with collectibles. It's always frustrating when they're not included.

Although the game takes place entirely in Egypt (minus one bonus level in Las Vegas' Luxor Casino), there is still a nice variety of locations to explore. Jonathan will be investigating ancient ruins, traveling down the Nile, riding a train to the Aswan Dam, taking a terrifying car ride through the Sinai mines, and staying at a fancy hotel in Cairo. It's nice to see the developer didn't restrict itself to the archaeological side of Egypt and decided to include some modern locations as well. 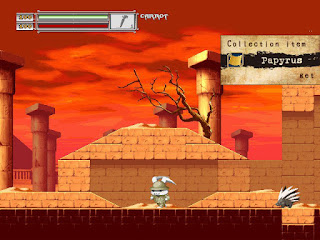 It should go without saying if you've watched the trailer, but Pharaoh Rebirth really shines in the audio and visual departments. While the sprites initially look a bit simple and cartoonish against the beautiful backgrounds, watching them in action is a real treat. The animations are top-notch, especially for larger enemies, and some of the animations for Jonathan and Andre are particularly amusing. The soundtrack is fantastic as well, with thumping rhythms that really get me into that adventurous spirit.

While I didn't have any major problems with the game, save for the lack of information about collectibles mentioned earlier, there were a few smaller issues that stood out to me. For one, the driving section was tedious, but the same can be said for basically any mine cart section of a video game (it is essentially a mine cart level, even though it happens in a car). I also found some of Jonathan's moves to be a little overpowered, especially the Shabti that produces a familiar and the basic air attack when used against bosses with large hitboxes. It might have been more fair if the air attack didn't also destroy projectiles. Lastly, there was a special ability that I unlocked towards the end of the game which I was never able to use. I couldn't figure out if it was a bug, a translation error, or my own inability to press the required key inputs, but it just wouldn't activate for me. It was a shame since it's so difficult to unlock in the first place.

If you're in the mood for some old-school platforming action, I'd definitely recommend checking out Pharaoh Rebirth. The quirky story, solid mechanics, awesome boss fights, and gorgeous animations all made it easy to overlook the minor flaws. The unlikely rabbit and turtle duo left quite an impression on me. In fact, I could certainly see Dr. Jonathan Banfield standing beside the likes of Quote, Lemeza, Aban Hawkins, and other indie greats.