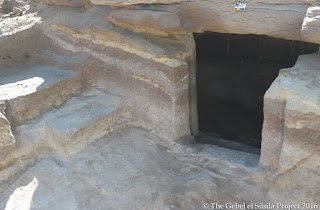 One of the rock-cut tombs of the necropolis found at Gebel el Sisila.
The Gebel el Silsila Survey Project 2016

A remarkable 3,400-year-old necropolis has been discovered at an Egyptian quarry site, the Ministry of Antiquities announced on Wednesday.

Consisting of dozens of rock-cut tombs, the New Kingdom necropolis was found at Gebel el Sisila, a site north of Aswan known for its stone quarries on both sides of the Nile. Blocks used in building almost all of ancient Egypt’s great temples were cut from there.

“So far we have documented over 40 tombs, including a small shrine on the banks of the Nile,” Lund University archaeologist Maria Nilsson, director of the Gebel el Silsila Survey Project, told Discovery News. “Many tombs are in bad condition. They have suffered from heavy erosion and extreme decay due to the rising water and its high salt contents,” Nilsson said.

Nilsson and associate director John Ward concentrated on the cleaning of a small selection of tombs. Their team worked in cooperation with the Ministry of Antiquities as well as Kom Ombo and Aswan Inspectorates under General Directors Abd el Menum and Nasr Salama respectively.

The shrine is a small rock-cut sanctuary featuring two open chambers facing the river and an inner doorway crowned with the winged solar disc. The burials, meanwhile, consist of one to two undecorated rock-cut chambers, with one or more crypts cut into the bed rock floors.

In some cases the archaeologists found remains of the original lids.

Generally accessed via a series of steps that descend into a rough-cut squared chamber, the tombs feature entrances consisting of a square aperture that incorporate a vertical slot to either door. This would have facilitated a heavy, vertically-closing type of closure.

“Due to the lack of exterior or interior decoration, the identity of the buried persons remains unknown at this time,” Nilsson said.

Since the burials are quite elaborate in their style, Nilsson and Ward speculate they are not tombs for the quarry workers, but were rather assigned to people of higher rank.

“However, the higher officials, viziers and such that were active at Silsila were buried in Thebes, so it is likely that the people entombed in the rock-cut graves belong to the level just below the officials. We are still studying this,” Nilsson said.

Indeed, fragments of painted mud-plaster — possibly remains of decorated coffins — pieces of mummy wrappings and various beads and amulets, suggest the burials were designed for individuals of considerable status.

The archaeologists also unearthed a reversible seal ring, which depicts the cartouche of Pharaoh Thuthmosis III “Men-kheper-re” and a scarab also bearing the pharaoh’s name.

The excavation wasn’t an easy task. Since the tombs were affected by the annual Nile floods, the archaeologists had to deal with disturbed layers containing pottery, bones, beads and Nile silt, mixed with remains of animals, including crocodiles.

“Preliminary analysis of the bones suggests burials of men, women and children of all ages. Importantly, this indicates a more permanent habitation at Gebel el Silsila than previously thought,” Ward said.