The monastery that isn’t - Al-Ahram Weekly

The monastery that isn't

Monks opposed to construction of a road in the Fayoum governorate are no longer recognised by the Coptic Orthodox Church, reports Michael Adel 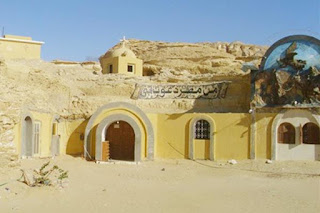 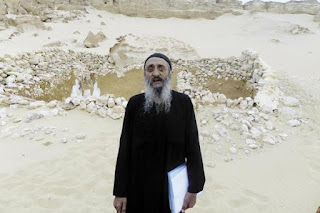 St Macarius of Alexandria Monastery, commonly known as the Wadi Rayan Monastery, in the governorate of Fayoum, may well be a misnomer since, according to the Coptic Orthodox Church, it is not a monastery at all.


It has been in the headlines because of an ongoing standoff between the monks, who may not be monks, and the Roads and Bridges Authority, which wants to build a road across land that the monks claim is theirs. When bulldozers arrived to demolish a wall around the monastery as part of the road construction several residents of St Macarius of Alexandria lay down in front of the earth-moving machines to halt the demolition.


The response of the Coptic Orthodox Church was to state that it does not recognise the monastery, leading several residents of St Macarius of Alexandria to threaten to internationalise the standoff by seeking religious asylum in a foreign state.


The problem has been simmering since 2013. It escalated following the arrest of Boulos Al-Rayani, one of the monks opposed to the new road that is slated to connect Zaafarana on the Red Sea coast with Al-Dabaa on the Mediterranean.


Pope Tawadros II has stated his disapproval of the monks' opposition to the road in no uncertain terms. He reprimanded them for their behavior before going on to announce that they were not monks at all.


St Macarius of Alexandria Monastery is not recognised as a monastery by the church, said Pope Tawadros, and therefore no member of the Coptic congregation should visit it or show its residents any other form of solidarity. The pope added that the land where some people calling themselves monks have squatted is owned by the state.


In an official statement, the church criticized "the inappropriate behavior by some residents who are opposed to the state's decision to build a road as part of a national development project". The residents, the statement continued, had "defied the engineers, and this is not the official position of the church".


Six months ago the Coptic Church formed a committee of three bishops to monitor the ongoing dispute. The committee removed the monk who was leading opposition to the new road and denounced two other residents for falsely claiming to be monks. But the committee's attempts to dissuade those who remained "of their obstinacy" were in vain.


In the statement, Pope Tawadros II made the Church's position clear: "The church declares that this site is not a recognised monastery. It renounces responsibility for it and fully recognises the state has the legal right to take action while preserving the antiquarian nature of the site, its holy areas, monks' cells and wildlife."


The Pope cautioned against visiting the site, saying to do so is a violation of vows of obedience. He added that the now-arrested Father Boulos had broken the law.


Coptic Orthodox Church spokesman Father Boulos Halim told Al-Ahram Weekly: "There are five conditions that must be met for the church to recognise the monastery and St. Macarius Monastery meets only one of these — that there is a monastic community living on the site.


"The other conditions have not been met. The monastery does not legally own any land. There is no spiritual and administrative director to oversee the place on behalf of the church. Nor is there a papal committee — a synod committee for the affairs of monasteries — to oversee it."


The presidential advisor for national projects, former prime minister Ibrahim Mehleb, headed a delegation of engineers from Arab Contractors and senior security officials who visited the monastery to negotiate with the monks over construction of the road. The delegation offered to preserve the monks' cells and the springs that supply residents with water, diverting the route of the road to do so, and to legalise the status of the monastery and construct a wall around.


Father Boulos was sceptical of the offer, saying, "It's just talk and when the time to build comes no one will follow the maps."


Church sources say the Monastic Affairs Committee of the Holy Synod has strenuously urged the monks to allow the oasis road to be built.


According to Wael Ragai, the detained monk's lawyer, "Detaining Father Boulos Al-Rayani is an attempt to pressure the monks and compel them to agree to the construction of the road. My client was assaulted while being arrested. The prosecution refused to document this or file a medical report."


The present complex was established in the 1960s when Father Matta Al-Maskin and his disciples moved to the site from Wadi Natron. Its residents claim that the area was home to a monastic foundation as early as the fourth century and say that they possess manuscripts that prove this.


Father Matta and his disciples dug caves that they used as cells. Matta remained at the monastery until Pope Kirollos VI ordered him to return to Wadi Natron. The monastery then remained closed until 14 monks unilaterally decided to reopen it.