'Designing Identity: The Power of Textiles in Late Antiquity' Review

An enlightening look at a once-vast empire and its wealthy elite. 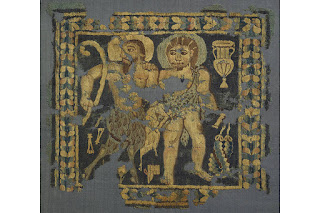 Designing Identity: The Power of Textiles in Late Antiquity

Institute for the Study of the Ancient World

The ever-changing semiotics of status are a rich subject for novelists and sociologists, and also a game we can all play while leafing through a few seasons of fashion and decorating magazines. But what if one doesn't have a wealth of photography, periodicals and paintings from which to draw conclusions? And what if textiles—materials intrinsic to the character of a time and place, and yet so perishable—are scarce? With such challenges before it, "Designing Identity: The Power of Textiles in Late Antiquity" gathers over 50 exceedingly rare luxury textiles into a show that represents the most recent scholarly sleuthing into a once-vast empire and its wealthy elite.

On view at New York University's Institute for the Study of the Ancient World, the exhibition begins with a definition and a map. The term "Late Antiquity" refers to the late Roman and early Byzantine empire. Its time period spans the end of the third century up through the seventh century, and its lands stretched north, west, south and east of the Mediterranean Sea, completely surrounding these waters. The empire's capital was Constantinople, just under the Black Sea, and religious diversity was such that although Christianity was growing, classical mythology remained well woven into the culture at large, its visual and literary motifs alive in pagan, Christian and Jewish art.

The exhibition takes place in two galleries, both painted to evoke Tyrian or "true" purple, a dye derived from a Mediterranean species of sea snail and so precious it was restricted to use on Imperial silks. This royal aubergine was highly desirable and a "pseudo-purple," achieved with vegetable dyes, came into wide use. In the first gallery, the wall color also suggests grapes and the intoxicating pleasures of life, for here the exhibition pays homage to Dionysus, the Greek god who gave wine to man and is associated with cheer and plenty, unconsciousness and transcendence.

A languorous divinity, Dionysus appears in many forms. He looms large in brightly colored tapestry wall-hangings, perhaps the most labor-intensive and costly of textile arts; is dimensional in bas-relief carvings of ivory and bone; and becomes a stylized silhouette worked into the intricate panels of tapestry weave that adorned upper-class clothing and "furnishings" (textiles for the home, some pieces still mysterious in their uses). Wall text by the curator Thelma Thomas, associate professor of fine arts at NYU, states that this "figural imagery would have worked in several ways: enhancing the architectural space, making Dionysus and [his retinue] present in the house, and setting the tone for and granting license to the activities, most likely drinking, dining, and erotic pleasures, that took place there." Magical thinking is operating as well: The god's totemic presence promises continued bounty in the banquet room.

In the middle of this gallery, a masterpiece: The "Dionysian Tunic"—early sixth century, lent by the Metropolitan Museum of Art—is laid out under glass, seams opened so that it makes the stark shape of a cross; at its center is a slit for the head. The ground weave is undyed linen, but on bust and back, at the wrists and hem, the tunic is embellished with a black-wool tapestry weave of exquisite imagery—dancing warriors; charging animals; winding vines; even captive women, topless with hands bound—all caught and compressed within squares, roundels and rectilinear bands. It is believed that this imagery refers to "the triumphant campaign of Dionysus through India, Nubia, and Ethiopia," and it no doubt reflected triumph on the man who wore it socially. The tunic's decorative bravura is as spectacular as it is refined and restrained.

The frequent appearance of Dionysus in these textiles may be due to the god's association with death and rebirth. In Late Antiquity a change in burial practice saw the dead no longer wrapped in bandages but dressed in multiple layers of "reused clothing and shrouds." Textiles with Dionysian motifs were thematically appropriate and hence were preserved intact in tombs. At the entrance to the second gallery we meet another gem from the underworld: a shroud painted with the full-scale image of a standing woman. Her gold jewelry, simple tunic, grooming and grace point to high status in Roman culture, while traditional Egyptian figures painted behind her suggest a multicultural background.

This spiritual and material mix of cultures blossoms in the second gallery's collection of tunics, mantles and furnishing fragments. Christian crosses and eight-pointed stars, palmettes and Solomon's knots, Greek keys and two-handled urns, nymphs and Pan—all pop and play within taut bands and tight circles of exceedingly fine tapestry-weave workmanship. Of particular charm is a doll's tunic of undyed linen, sixth to eighth century. Not just toys, dolls were used to teach wellborn children proper behavior and the etiquette of dress. This tiny tunic is brightened with tapestry-weave scraps that bear a motif similar to one found in Caucasian rugs, the mother-and-child boteh. Little shapes seeded within their larger likeness—the next generation held in cellular suspension—it's a motif that foresees the future.

Ms. Jacobs writes about culture and fashion for Vanity Fair.