It is a battlefield of books, and the literary production of many centuries had their share in the battle, and their disjecta membra are now strewn over its area" 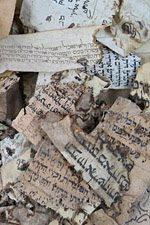 
The Taylor-Schechter Cairo Genizah Collection at Cambridge University Library is the world's largest and most important single collection of medieval Jewish manuscripts. For a thousand years, the Jewish community of Fustat (Old Cairo), placed their worn-out books and other writings in a storeroom (genizah) of the Ben Ezra Synagogue, and in 1896–97 the Cambridge scholar, Dr Solomon Schechter, with financial help from the Master of St John’s College, Charles Taylor, arrived to examine it. He received permission from the Jewish community of Egypt to take away what he liked (explaining later, ‘I liked it all’), and he brought 193,000 manuscripts back to Cambridge, where they form the Taylor-Schechter Cairo Genizah Collection.

The storeroom where the manuscripts were stored by the community of Fustat was a genizah, a sacred storeroom. According to rabbinic law (see, for instance, Mishna Shabbat 16:1), once a holy book can no longer be used (because it is too old, or because its text is no longer relevant) it cannot be destroyed or casually discarded: texts containing the name of God should be buried or, if burial is not possible, placed in a genizah.

At least from the early 11th century, the Jews of Fustat, one of the most important and richest Jewish communities of the Mediterranean world, reverently placed their old texts in the Genizah. Remarkably, however, they placed not only the expected religious works, such as Bibles, prayer books and compendia of Jewish law, but also what we would regard as secular works and everyday documents: shopping lists, marriage contracts, divorce deeds, pages from Arabic fables, works of Sufi and Shi'ite philosophy, medical books, magical amulets, business letters and accounts, and hundreds of letters: examples of practically every kind of written text produced by the Jewish communities of the Near East can now be found in the Genizah Collection, and it presents an unparalleled insight into the medieval Jewish world.

Alongside the T-S Collection, Cambridge University Library is also now the home of the Jacques Mosseri Genizah Collection. Assembled by the successful Cairene businessman, Jacques (Jack) Mosseri in the first decade of the twentieth century, these manuscripts were intended to remain in Egypt as part of the Jewish community’s cultural heritage. However, after Mosseri’s premature death in 1934 and his family’s subsequent departure from Egypt, his eponymous collection disappeared from scholarly view until the 1970s, when it was microfilmed by a team from the Jewish National and University Library. Following recent discussions with members of the Mosseri family, in 2006 this 7000-fragment collection came to Cambridge University Library on a 20-year loan. During its stay in Cambridge, the Mosseri Collection will be conserved and digitised, and a new, detailed catalogue produced.

At the moment, over 18,000 manuscripts from across the Taylor-Schechter, CUL Or. and Jacques Mosseri Collections are available online, including a substantial number of documents (letters and legal deeds) and liturgical texts (the fruits of a joint project with Ben Gurion University). More manuscripts will be added on a regular basis, until the entire Cambridge Genizah Collection is online.

Thanks to generous funding from the Andrew W. Mellon Foundation, over 4000 documentary Genizah manuscripts (e.g. letters and legal documents) have been associated with key terms - such as ‘cheese’, ‘pirates’, or ‘ gambling’ - as well as names, dates and places drawn from over 100 years of published scholarship on the Collection. These associated terms provide an entry point into the Collection for those unsure of how to find documents of interest to their field of study.

(To search the collection, you'll need to go to the website. Glenn)