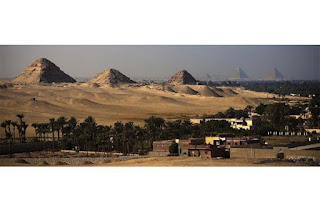 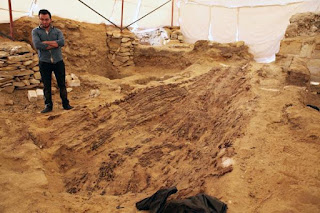 Scholars have long debated the purpose of ancient Egyptian boat burials. Did they serve the deceased in the afterlife? Or might they have functioned as symbolic solar barques used during the journey of the owner through the underworld?


The Old Kingdom kings adopted the earlier tradition and often had several boats buried within their pyramid complexes. Unfortunately, most of the pits that have been found are empty of timber, while others contain little more than brown dust in the shape of the original boat. The only exceptions are the two boats of the First Dynasty king Khufu, and these have been reconstructed or are in the process of reconstruction.


However, no boat of such dimensions from the Old Kingdom has been found in a non-royal context until the newly discovered boat at Abusir.


Last December, a Czech archaeological mission from Charles University in Prague stumbled upon what is believed to be the first remains of a non-royal ancient Egyptian wooden boat ever found. The discovery was made during excavation work at the Abusir necropolis, in an area south of a still unidentified non-royal mastaba tomb identified as AS54.


Miroslav Bárta, the leader of the mission, told Al-Ahram Weekly that this unexpected discovery once again highlights the importance of this Old Kingdom official cemetery. He said that the excavation work that led to this important discovery started in 2009 on mastaba tomb AS54 and had been followed by several seasons of excavations.


The tomb’s exceptional size (52.60 metres by 23.80 metres), orientation, architectural details, as well as the name of the Third Dynasty king Huni discovered on one of the stone bowls buried in the northern underground chamber, indicated the high social standing of the person buried in the main and so far unlocated shaft, he said.


“Unfortunately, his name remains unknown due to the bad state of preservation of the cruciform chapel,” Barta said. He added that clearance work in the area south of the tomb during the autumn excavation season, from October to December 2015, had revealed an 18-metre-long wooden boat.


“Although the boat is situated almost 12 metres south of the tomb, its orientation, length and the pottery collected from its interior make a clear connection between the structure and the vessel, as both are dated to the very end of the Third or beginning of the Fourth Dynasty, or around 2550 BCE,” Bárta said.


While extremely fragile, the roughly 4,500-year-old planks should shed new light on boat construction in ancient Egypt. The wooden planks were joined by wooden pegs that are still visible in their original positions.


Extraordinarily, the desert sand has preserved the plant-fibre battens of the boat that covered the planking seams. Some of the ropes that bound the boat together are also still in their original position, with all their details intact.


During this current spring season, which started earlier this month, Bárta said that the Czech Institute of Egyptology has launched a project in collaboration with experts from the Institute of Nautical Archaeology (INA) at Texas A&M University to study the techniques used in the hull’s construction.


The construction details are not the only features that make the boat unique, he said, adding that the habit of burying boats beside mastabas began in the Early Dynastic period. This phenomenon has been well documented for royal structures, as well as for some tombs belonging to members of the royal family, the elite of society.


“In fact, this is a highly unusual discovery since boats of such size and construction were during this period reserved solely for top members of the society who usually belonged to the royal family. This suggests the potential for additional discoveries during this spring season,” Bárta noted, adding that where there was one boat, there very well may be more.


He said that the boat is a remarkable discovery and that “the careful excavation and recording of the Abusir boat will make a considerable contribution to our understanding of ancient Egyptian watercraft and their place in funerary cults”.


“The boat by the southern wall of the mastaba tomb indicates the extraordinary social position of the tomb’s owner,” Minister of Antiquities Mamdouh Eldamaty told the Weekly, explaining that since it was not located adjacent to a royal pyramid the owner of the mastaba was probably not a member of the royal family.


However, both the size of the tomb and the presence of the boat itself clearly placed the deceased within the elite of his time with strong connections to the reigning pharaoh.


Eldamaty described the discovery as “very important” because it is the first time that such a boat has been found at the Abusir necropolis. A collection of clay pots from the end of the Third Dynasty and the beginning of the Fourth Dynasty, also unearthed, could help reveal the specific date of the construction of the boat and mastaba, he said.


Bárta said that King Huni, whose name was found on a pot in tomb AS54, was the last king of the Third Dynasty and details about his reign are largely unknown, despite the Turin Royal Canon from the New Kingdom identifying him as having had a long reign of 24 years.


“The historical evidence for Huni’s existence is minimal,” Bárta said, adding that neither his tomb nor his funerary complex and collection have been located. The only contemporaneous monument explicitly attesting to his existence is a red granite block found in Elephantine in 1909 by Egyptologist H Gauthier.


The block includes the pharaoh’s name in a cartouche and a caption that mentions the building of a fortress or palace.


Bárta explained that apart from the Abusir and Saqqara residential cemeteries, Huni was known only from the mastaba of Metjen. Huni’s name occurs there in connection with a funerary domain in the second Lower Egyptian nome (district). The tomb of Nefermaat and Atet in Meidum has also been connected with Huni.


“Now we have new evidence for Huni from the mud-brick mastaba tomb AS54 in Abusir where a pot engraved with his name was found,” Bárta said. He added that the tomb measures 52.6 metres by 23.8 metres and consists of a southern chapel, northern chapel, northern substructure and some adjoining structures.


The entire eastern facade of the mastaba is protected by a surrounding 1.4-metre-high wall. The cult chapel is situated at the southeast corner of the mastaba and is embedded within its superstructure. The facade of the entrance has an inclination of 81 degrees and was entered through a small corridor. The cult room itself originally assumed the shape of a typical cruciform chapel and is about 40.8 metres above sea level.


“Apparently, during the use of the tomb the chapel was converted into a simple cult room with a false door located in the western wall,” Bárta said, explaining that this renovation was made by walling up the original niches in the western, southern and northern walls.


The tomb has a subterranean structure that was accessible through a 12.6-metre-deep shaft. A collection of badly damaged stone vessels was found in the subterranean structure, including bowls, tables and trays, along with beakers, medium-sized jars of several types, tall cylindrical jars and a lid. A number of calcite vessels and others made of anorthosite, magnesite, anorthosite gneiss, limestone metagabro, breccia serpentinite and dolomite have been found.


Due to the fact that most of these materials are homogenous, Bárta suggests that the vessels may have come from a single deposit. In one particular case, it is possible to read a rare form of Huni’s royal name on the inner rim of a magnesite bowl.


“This is the only inscriptional evidence from the mastaba that we have so far,” he noted. It was interesting that all the vessels except for this one were devoid of inscriptions, he said. Adjoining the tomb’s eastern enclosure wall on the northeast side, four shafts were found with some of them used for burials.


“Despite the meagre evidence, the tomb discovered in Abusir has several features that show its importance and the high social rank of the anonymous owner,” Bárta said. The tomb also has a noticeably elevated location within the cemetery, in fact the highest location in the area overseeing Lake Abusir and the once principal entrance into the Third Dynasty necropolis of Abusir and Saqqara.


Two other prominent features, Bárta pointed out, are the unique monumental architecture of the tomb and the large corpus of stone vessels.