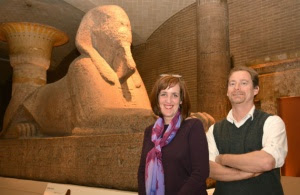 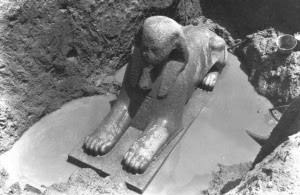 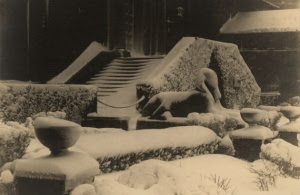 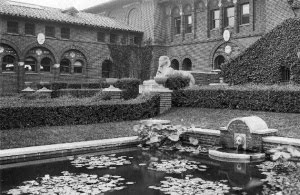 The Journey From Egypt to Philadelphia of the Penn Museum's Sphinx

When the massive sphinx arrived in at the University of Pennsylvania Museum of Archaeology and Anthropology in Philadelphia in 1913, it was eclipsed by another historic event in the city – opening day of baseball's World Series with the Philadelphia Athletics hosting the New York Giants.

So, on Oct. 7, 1913, when the ship carrying the 13-ton artifact from the ancient Egyptian capital of Memphis docked at the Delaware River waterfront, no workers were there to unload it from the ship.

"Everyone was tuned in some way to the game," says Jennifer Houser Wegner, associate curator in the Egyptian Section of Penn Museum and an adjunct assistant professor in the Department of Near Eastern Languages and Civilizations in the School of Arts & Sciences.

So, for two days, the sphinx remained in the Schildturm, the ship that brought it to Philadelphia.

"It stayed on the dock until they could hoist it out," says Josef Wegner, also associate curator in the Egyptian Section and an associate professor in Near Eastern Languages and Civilizations.

This is among the fascinating stories about the sphinx's voyage that the Wegners share in their book, The Sphinx That Traveled to Philadelphia: The Story of the Colossal Sphinx in the Penn Museum.

The work chronicles the sphinx's excavation and archaeological history, as well as how the it is meaningful to the history of Philadelphia, Penn and the Museum.

The sphinx is one of the Museum's top attractions for visitors of all ages, as well as scholars from across the globe who come to view items in the Egyptian Section to conduct research.

The Wegners, who work together and are married with a 12-year-old son, originally considered writing a children's book about the sphinx since the Museum is a popular destination for class trips. As they began conducting more research, however, they found that no one had ever published a comprehensive account of the sphinx's history.

Made of red granite, it is believed to be more than 3,000 years old. It has the body of a lion with a human head and represents the Egyptian king as protector of his people and conqueror of enemies.

The name of Ramses II is carved on the sphinx, but the monument was originally created for another king probably from a half a millennium earlier.

"We know that they created really impressive big sphinxes at that time," says Joe Wegner. "Oftentimes hundreds of years later, kings like Ramses II would re-carve them."

He says that, at the time, temples had fallen into disrepair and when the king began rebuilding them they re-carved the sphinxes with new names on them.

Excavated by British archaeologist W.M. Flinders Petrie in 1912, the sphinx came to the Penn Museum because it funded Petrie's research at the time.

"He was working in Memphis and found a fair number of really interesting things over six seasons," says Wegner.  "In the 1912 season he happened to find this big sphinx down below the surface in the mud, and they pulled it up. The Egyptian authorities didn't want to keep it."

The book includes correspondence between Petrie and the director of the Museum, George Byron Gordon. In one letter, Petrie writes to Gordon on Nov. 20, 1912, offering him the "colossal sphinx of Ramses II."  Gordon responds saying, "If you will kindly send me a photograph of the sphinx, I will let you know at once whether we will accept your offer of it."

"There was a little bit of discussion back and forth and it seemed to happen quickly that the Museum decided it did in fact want the sphinx," says Houser Wegner.

The journey from Egypt to Philadelphia was a challenge from the start. The sphinx was pulled across fields in Egypt to a nearby train depot. Then, it was loaded onto a train to Cairo, then to the Suez Canal. The sphinx sat there for a couple of months before there was a ship available that was large enough to accommodate it.

The sphinx's arrival in Philadelphia generated what Wegner says was "quite a bit of excitement."

At the time, Philadelphia had more than a dozen daily newspapers, as well as numerous weeklies. Some of the stories are included in the book along with rarely seen photos of the sphinx at the Delaware River dock and as it was making the final leg of its journey through city streets to the Museum.

"When the sphinx was finally delivered to the Museum, it had to be hoisted over the front wall out front," says Houser Wegner.

For the first couple of years, the sphinx's home at Penn Museum was in the garden in front because there wasn't a space large enough for it to fit indoors.

The sphinx was later moved just inside the Museum's front doors, where it resided for a few years while its permanent home in the lower Egypt Gallery was being constructed.

The Gallery has been the sphinx's home since the mid-1920s.

"Once the sphinx was moved inside, the walls were completed and blocked up," says Houser Wegner. "Now, additional parts of the building have been built since then, so it's sort of trapped in that gallery. If it were ever to leave here it would have to go through a hole that would be cut through the wall."

On March 19, the Wegners will share stories from The Sphinx That Traveled to Philadelphia: The Story of the Colossal Sphinx in the Penn Museum during the Museum's World Culture Day "Egyptomania!" event. From 11 a.m. to 4 p.m., visitors can also participate in a belly-dancing workshop, make crafts and hear talks on Egyptian history and archaeology. The events are free with Museum admission.