NEW YORK (AP) — An imprisoned Egyptian author and journalist is being given the PEN/Barbey Freedom to Write Award, presented by PEN America.

Ahmed Naji received a two-year sentence in February for "destroying social values," an allegation tied to the content of his novel "The Use of Life." The 30-year-old Naji has written three books and is a contributor to the state-owned Akhbar al-Adab literary magazine, among other publications. His trial came after Akhbar al-Adab released an excerpt in 2014 from "The Use of Life" that contained explicit sex acts and references to habitual drug use. The complaint against Naji originated when a reader of Akhbar al-Adab alleged that the excerpt made him physically ill.

"Naji's case is emblematic of Egypt's escalating crackdown on artistic freedom in flagrant disregard for its own constitutional protections and at the expense of the country's rich cultural traditions," PEN America Executive Director Suzanne Nossel said in a statement to The Associated Press on Thursday. "PEN hopes that this award will spur writers, readers, advocates, and world leaders to press Egypt to release Naji immediately and to stop treating creativity as a crime." 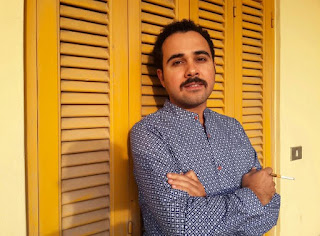 FILE - In this undated image Egyptian author Ahmed Naji poses for a photo in Cairo, Egypt. Naji is being given the PEN/Barbey Freedom to Write Award, presented by PEN America. PEN, the literary and human rights organization, said that it will honor Naji on May 16 at its annual gala. He was sentenced to two years in jail in February, by a Cairo appeals court for publishing a sexually explicit excerpt of his novel that prosecutors said violated "public modesty." Naji was initially acquitted by another court, but prosecutors appealed the verdict. (Yasmin Hosam El Din via AP)

Egyptian writers, artists and filmmakers have denounced the jailing of Naji, which followed a 1-year sentence handed to TV presenter and researcher Islam Behery for "defaming religious symbols," and three years to writer Fatima Naoot for defaming Islam.

PEN, the literary and human rights organization, has given its Freedom to Write Award to jailed writers everywhere from Saudi Arabia to Cuba. Established in 1987, the prize is for writers "who have fought courageously in the face of adversity for their right to freedom of expression."

PEN will honor Naji on May 16 at its annual gala in Manhattan. PEN spokeswoman Sarah Edkins told the AP it has not yet been determined who will accept the award on Naji's behalf.

Other award recipients include J.K. Rowling for inspiring children worldwide to read and Dr. Mona Hanna-Attisha and LeeAnne Walters for their efforts in exposing the lead contamination in the water of Flint, Michigan. PEN also will cite Michael Pietsch, CEO of Hachette Book Group, for his leadership in fighting censorship.