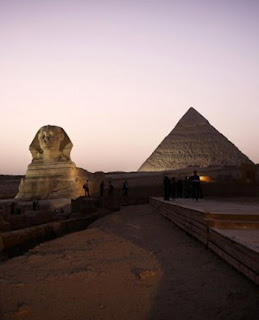 The Egyptian Antiquities Ministry restored the courtyard in front of the Sphinx and the pyramid of King Khafre as part of their project to preserve Egypt’s heritage and promote tourism to the country. (Mohamed El-Shaheed, AFP)

Cairo - Egypt's central bank said on Monday it had devalued the Egyptian pound by 14.3% to 8.95 to the US dollar to face "challenges" emerging from declining foreign currency inflows.

The bank has been battling an acute US dollar shortage over the past few months, with the local currency often trading at a rate of almost 10 pounds to a dollar on the black market.

The devaluation boosted sentiment on the stock market, with Egypt's benchmark EGX30 index rising 6.7%  to 7,003.91 in midday trading.

The Central Bank of Egypt said the move to devalue the pound was aimed at adopting a "more flexible foreign exchange policy" that would be driven by demand and supply.

"This will resolve the exchange rate irregularities, resulting in a more regular and continuous flow of foreign currency," it said in a statement.

The move would also help face "challenges from a noticeable decline in foreign currency inflows from tourism, direct investment and remittances from Egyptians living overseas".

Tourism, a cornerstone of the Egyptian economy and a key foreign exchange earner, has been severely hit by years of political turmoil triggered since the fall of Hosni Mubarak in 2011.

It was dealt a body blow with the bombing of a Russian passenger airliner over the Sinai Peninsula on October 31 that killed all 224 people on board, mostly Russian tourists.

The jihadist Islamic State group said it blew up the plane with a bomb on board.

Egypt's foreign exchange reserves have fallen from more than $36bn in 2010 to about $16bn, despite some $20bn given in aid to Cairo by its powerful Gulf allies.

But the bank said the reserves would reach $25bn by the end of 2016 on the back of "foreign investments and an increase in the competitiveness of the Egyptian economy".