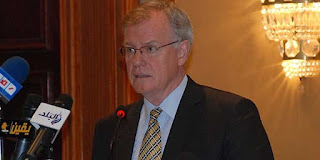 The pledge was made during Moran’s meeting with Antiquities Minister Mamdouh Damaty, according to a statement released on the ministry’s Facebook page.

The two sides reviewed possibility of “forming a partnership to safeguard cultural heritage in Egypt and to debate the measures to combat cultural racketeering and illicit trade in antiquities,” said the ministry.

The systematic theft of art and antiquities by organized crime has increased at Egyptian archaeological sites in the past three years, with devastating consequences for the country’s priceless cultural heritage, Deborah Lehr, founder of the International Coalition for the Protection of Egyptian Antiquities said during a news conference held in Cairo in May 2015.

During the meeting, Damaty hailed recent amendments made by German legislators to facilitate the recovery of looted artifacts. The minister expressed his wish to disseminate such amendments to all EU countries.

Germany’s Freiburg Court has issued a ruling acknowledging Egypt’s liability in repatriating an ancient vase dates back to Egypt’s pre-dynastic period, the Antiquities Ministry announced in a statement in February.

During the past four years, Egypt has recovered more than 1,600 artifacts and is currently working on other cases in many European countries, former head of the Repatriated Artifacts Department Aly Ahmed told The Cairo Post last year.