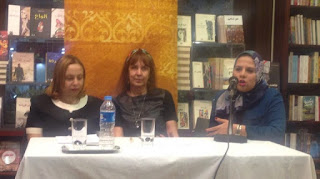 Swedish author Anne Edelstam's latest novel "Three Ladies in Cairo" narrates the experiences of three Swedish women in Egypt; their hardships, the good times and the bad.  The novel, which is published by an Egyptian-Lebanese publishing house, was released last week in Egyptian bookstores after being translated into Arabic.

The novel is a fictionalised retelling of the lives of Edelstam herself, along with her mother Ingrid, and her grandmother Hilda, in Egypt.

Throughout the narrative, the reader rediscovers the history of Egypt's modern civilisation over the course of the 20th century, and its social and political transformations, up to Egypt's first free elections in June 2012.

"Women's voice comes through loud and strong in the book as there are three women speaking about their lives," Edelstam said. "I included famous Egyptian feminists in the story such as Nawal El-Saadawy and Huda Shaarawy, who are personal friends."

Edelstam's grandfather first came to Egypt to work as a judge in the mixed courts. The three generations, Anne, Ingrid, and Hilda, share their experiences in coping with the different social and cultural upheavals during their time in Egypt.