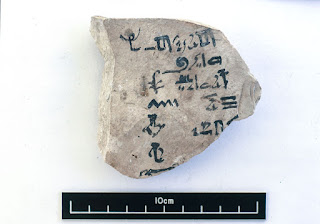 (Courtesy NWO)
LEIDEN, HOLLAND—An ostracon dating to the fifteenth-century B.C. is being called the world's oldest-known abecedary by Egyptologist Ben Haring of Leiden University, whose work has been supported by The Netherlands Organization for Scientific Research (NWO). The limestone flake, discovered in a tomb in Luxor more than 20 years ago, is inscribed with a list of ancient Egyptian words written in hieratic script. The words have been arranged according to their initial sounds in the HLHM order used by ancient Egyptian, Arabian, and Ethiopian scripts. A column of signs to the left of the words may be abbreviations or even the initial sounds, which would make them alphabetic signs. Inscriptions inspired by Egyptian hieroglyphs have been found in the Sinai Desert and in southern Egypt, and are thought to be the earliest known alphabetic characters. Some of these characters are in the left column of the word list on the ostracon, and could help scholars reconstruct the earliest-known alphabet. To read more about ancient Egypt, go to "Messengers to the Gods."