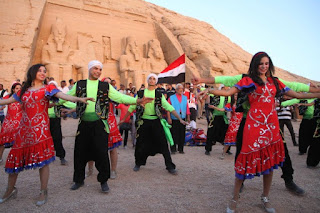 Ministers of tourism, antiquities and irrigation, dozens of tourists, 55 French tour operators along with Aswan Governor Mostafa Youssry were present during the celebration.

"At 05:35 a.m., the sun's rays struck the temple's sanctuary and illuminated the faces of the statues of Ramses II, God Ra-Horakhty and God Amon-Ra and leaving the statue of Ptah, the God of darkness in darkness. The sanctuary went dark again at around 05:45," tour guide Magdy Abdel Mohsen told The Cairo Post Thursday.

Abu Simbel is the seat of two rock-cut temples that were built by Ramses II (1279B.C.–1213 B.C.); the great temple which was basically dedicated to God Amon-Ra and the temple of Queen Nefertari, the pharaoh's wife, archaeologist Sherif el-Sabban previously told The Cairo Post.

"In the 1960s and during the construction of the High Dam in Aswan, UNESCO launched a universal campaign to rescue the twin temples along with other Nubian monuments to avoid their being submerged during the creation of Lake Nasser, a massive artificial water reservoir formed after the building of the dam," said Sabban.