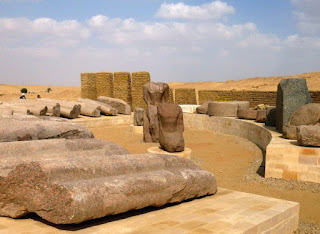 CAIRO: The conservation project of the ancient Greco-Roman city of Kiman Faris has been completed, Antiquities Minister Mamdouh al Damaty announced in a statement Saturday.

Ancient Egyptian and Greco-Roman statues and other architectural details found at the site have been under restoration by ARCHiNOS Architecture since 2012, said Damaty. The organization also was responsible for the presentation of the artifacts that came to the site from rescue excavations in preparation for turning it to an open-air museum, he added.

Video: "A GLIMPSE OF A LOST CITY" - https://youtu.be/MOV2MiHJygQ

The display scheme of the artifacts is managed by the American, Dutch, New Zealand team excavating and conserving the site, according to Damaty.

“Kiman Faris was one of the largest Greco-Roman cities in the Fayoum. It was established by the Greek king Ptolemy II Philadelphus (285 B.C. – 246 B.C.) and was originally inhabited by the mercenaries of his army. The site was a religious center for the worship of God Sobek; the crocodile God. The population of the prosperous city was estimated at 2,800 people,” archaeologist Fathy Khourshid told The Cairo Post Sunday.

The earliest archaeological origins are at the city’s South Temple and can be traced to the 1st century B.C., he added.

“The exhibited pieces are among the few physical remnants of this once prominently important city and its grand temple. The work was done as part of the URU Fayoum Project (University of California, Rijksuniversiteit Groningen and University of Auckland) under the supervision of the Egyptian Ministry of State for Antiquities. It is funded by the United States Ambassadors Fund for Cultural Preservation,” ARCHiNOS said in its webpage.