The New Ritz-Carlton Signals a Return to Luxury in Cairo 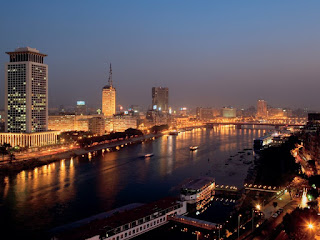 An evening view of the now-tranquil downtown Cairo.

Almost five years after the Arab Spring rocked the city, Cairo is welcoming back a luxury hotel.

Nearly five years ago, violent protests broke out in Cairo’s Tahrir Square, marking a critical point in the country’s Arab Spring uprising that sought to remove former president Hosni Mubarak from power. Disturbing images of bloodied protesters, many who were victims of brutal force by Egyptian police, were streamed throughout the world on television and social media. And shortly thereafter, Egypt’s bustling tourism business (one in every seven Egyptian jobs is travel-related) came to a sudden stop. The U.S. State Department issued a travel warning. Major tourist attractions, including the Giza pyramids and Sphinx, were closed for several days. Hotels enforced curfews and many tour operators put their upcoming visits on hold.

Yet today, despite the fact that the images of Tahrir Square conflicts endure online, life is very much back to normal for Cairo, including tourism.

Travel specialist and native Egyptian Rami Girgis of Abercrombie & Kent, an Illinois-based tour operator, said Egypt is one of their top-selling destinations for this year and next.

"We’ve sent hundreds of people there without any issues," he told Condé Nast Traveler.Other than the usual precautions one should take when visiting a big city, he stressed that Cairo is completely safe to visit.

Now, in a sure sign that the city is more than ready to welcome tourists again, a new luxury hotel has opened. Today Ritz-Carlton Hotels unveiled their long-awaited hotel in Cairo, along the Nile River and across from Tahrir Square. The hotel, formerly the Nile Hilton—which once hosted Elizabeth Taylor and Frank Sinatra—was acquired by Ritz-Carlton in 2009, with a plan to renovate and reopen the hotel within two years. But political unrest, along with some construction challenges, put those plans on hold.

In its new incarnation, the landmarked building has retained much of its historical exterior, but inside, the Nile Ritz-Carlton has 331 rooms and suites, done in a traditional luxury style, and many of the rooms boast views of the famous river. Other amenities include an Olympic-size swimming pool, a rooftop terrace, as well as 10 restaurants and lounges that offer cuisines ranging from Arabic to Italian. Ritz-Carlton has also put together several expeditions for guests during their stay, such as visits to the Khan el-Khalili bazaar and the Egyptian Museum of Antiquities, as well as a private dining experience on a felucca,a traditional Egyptian sailboat. Ritz-Carlton Cairo even has their signature Ritz Kids program in place.

But visitors may find the most authentic experiences just walking the streets of Cairo. "Cairo is a very lively and active city,” Girgis said. "Nobody, young or old, goes to bed before one in the morning. They are all on the streets at night.”

Ashish Sanghrajka, president of Big Five Tours & Expeditions, echoed that observation. "Walking along the Nile, having lunch at different restaurants, having conversations about politics, that’s become the new normal," he said. "People are even walking through Tahrir Square as if it’s a tourist attraction. The only negative to visiting Cairo right now is its heavy traffic, but that’s the way it’s always been."

For those still concerned about their safety in Cairo, Girgis pointed out that Egypt has its own tourism police, which posts an officer outside of every hotel. Additionally, he said, luxury hotels like the Ritz-Carlton often hire their own security. Tour operators are also required to hand over their clients' itineraries to the tourism police so they can keep track of their stops while in the country.

But it's precisely this hesitation of some travelers that actually makes Cairo a desirable city right now, at least to more adventurous travelers. Sanghrajka said because Cairo is not inundated with tourists now, hotel room rates are low. That, coupled with the country's extremely young population, makes Cairo an ideal city for millennial travelers. "It used to be if you were a mature traveler and this was on your bucket list, then you would go to Cairo," he said. "Now, if you’re looking someplace trendy to go, Cairo is it."