requests the pleasure of your presence

at a ceremony celebrating the completion of

Screening of a short documentary entitled,
“A Glimpse of a Lost City”

A perspective on the project by Prof. Dr. Willeke Wendrich,
Director of the URU Fayum Project, the University of
California, Los Angeles (UCLA), entitled,

“An immense hall with doors of electrum: the importance of the
Fayum throughout (pre-)history”

Walk-through of the photo exhibition and refreshments

The Kiman Faris Open Air Museum was designed and implemented for the URU Fayum Project (University of California, Los Angeles, Rijksuniversiteit Groningen and the University of Auckland) by Agnieszka Dobrowolska, Architect, through The Association for the Urban Development of Islamic Cairo, in cooperation with the Egyptian Ministry of Antiquities and in collaboration with the Embassy of The United States of America, in support of the preservation of the Greco-Roman ancient city of Karanis. This project received financial support as one of the winners of the 2013 U.S Ambassador’s Fund for Cultural Preservation (AFCP) annual global competition. AFCP is funded worldwide by the Bureau of Educational and Cultural Affairs (ECA), U.S. Department of State, Washington, DC. 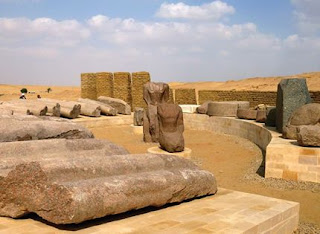