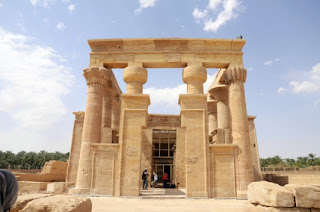 “The 72 million EGP ($90 million) project started in 2005 and included the restoration of the temple’s walls, carvings and paintings along with the drainage of groundwater present from the agricultural lands surrounding the temple,” Damaty told Youm7.

Located in Al-Kharga Oasis 600 kilometers southwest of Cairo, the temple dates back to the reign of Persian King Darius I in the 27th Dynasty (c. 525 B.C.), and was also used as a garrison until 330 B.C., former Secretary-General of the Supreme Council of Antiquities (SCA) Abdel Halem Nour el-Din told The Cairo Post Wednesday.

“The renovation project was entirely carried out by Egyptian experts from the antiquities ministry. Its opening comes in the framework of the ministry’s strategy to introduce new points of interest to Egypt’s tourism movement,” Damaty was quoted by Youm7.

Being surrounded by agricultural lands, the Hibis Temple has been severely damaged during the past five decades due to the groundwater and the locally rising water table caused by farming and irrigation activities in the area, Damaty said.

A double wall cofferdam of 13 meters deep was created around the temple to prevent leakage, he added.

“A Sphinx Avenue flanks the façade of the limestone temple and goes through its gates, courts and sanctuary. It also contains evidence of use in later periods, including the early Christian and Islamic periods, when the temple is strongly believed to have been used by Muslim Pilgrims en route to Mecca,” said Nour el-Din.