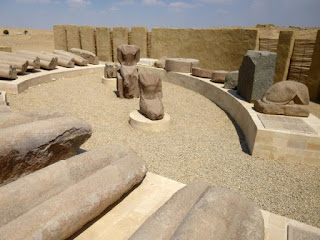 The Open Air Museum at Kiman Faris. Antiquities Ministry Facebook page.
By THE CAIRO POST
Cairo – At an October 26 ceremony and reception at the Ministry of Antiquities, Ambassador Stephen Beecroft joined Minister Mamdouh Eldamaty in announcing the opening of the Kiman Faris Open Air Museum. The museum, which is about to open in Karanis, is supported by the United States and Egyptian governments in partnership with the Cairo-based firm ARCHiNOS Architecture.
The Ambassador and Minister toured a 55-photo exhibit of the work done at Karanis over the last two years and viewed a short documentary film entitled, “A Glimpse of a Lost City.”  Ambassador Beecroft noted that “this project shows how appreciating cultural heritage is one of the best ways to foster understanding between nations and peoples.”
Karanis in Kom Aushim, located north of the city of Fayyum, was an important agricultural settlement for both the Greeks and Romans.  The Kiman Faris Open Air Museum displays rare pieces from ancient Fayyum, a city which existed and thrived during the Middle and New Kingdoms, including under Amenemhat III about 3,850 years ago, and later under Ramses II.
The Embassy contributed $97,000 to the project through the “Ambassadors Fund for Cultural Preservation,” a worldwide competition organized by the U.S. Department of State in over 100 countries.  The open air museum and restoration project in Karanis is one of several initiatives the U.S. government has funded over the years, in partnership with the Ministry of Antiquities and others, to help preserve and protect ancient sites in Egypt.
The previous press release is the responsibility of the British Foreign Ministry, and does not reflect the editorial policy of The Cairo Post.