Egyptian Chronicles: Alexandria is drowning while Winter has not come yet !!

Alexandria is drowning while Winter has not come yet !! 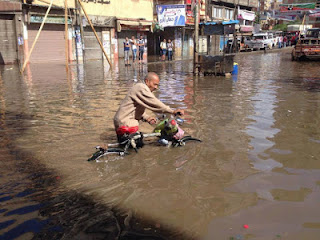 At least 5 people were killed due to the bad weather conditions there.
For hours, traffic was paralyzed as a result of the drowned streets and tunnels thanks to the heavy rain. 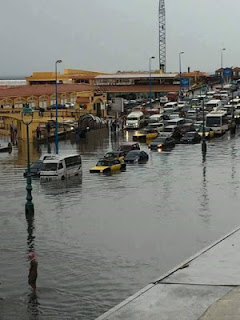 Photos speak alone about the chaos in the city today.
At least four people including two children died in a very unfortunate way when they were electrified in water in the street as a Tramawy cable fell into drowned the street due to the strong wind in Moharram Bey in Alexandria.
Moharram Bey district looks so bad.

Another victim, a sea captain drowned in his car early morning.
Unfortunately, the poor districts in Alexandria and the poor people there have got the worst share of this disaster.
Those two photos were sent to Al-Masry Al-Youm newspaper through its Whatsapp service from Alexandria for a citizen whose house drowned in that flood in Ibrahimia district.
Here is Faculty of Art in the University of Alexandria !!!
Here is the famous Alexandria cornich !! 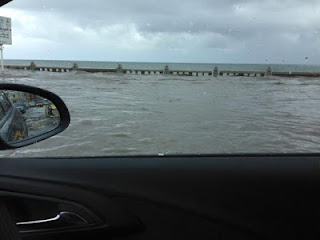 This is Cleopatra tunnel.

This is Gamal Abdel Nasser tunnel.

This is a flood for God’s sake !!
As usual, the city of Alexandria is drowning in water after the thunderstorm that hit it yesterday as a result of the lack of rain drainage system.
I know that Alexandria had a rain drainage system, where is that system the old cosmopolitan city had in its gone days went !??
Egypt’s Metrological authority has been warning for days that the country would be hit of rain and unstable weather conditions so the authorities are warned.
Alexandrians are mad at their Governor Hany El-Messiry whom they believe that he is focusing on the tramway and its improvements leaving the infrastructure of the governorate to crumble.
It is fair to say that the infrastructure of the old city is crumbling from a long time before El-Messiry would be appointed. Still what did Hany El-Messiry do since being appointed in February other than appearing in the media here and there !?
He knows as a local that Alexandria always drowns in thunderstorms then why he did not prepare the city for it !?
This man is originally from Alexandria and his wife is the daughter of a former Alexandria governor so I would assume that he knows very well the problems of the governorate.
Some will say that it is the problem of the local councils and municipalities not only the governor which is true.
Now El-Messiry is saying that Alexandria was facing an environmental disaster !! I am glad that he understands this.
There is now an active hastage on twitter calling for his dismissal in Arabic : #DismissElMessirry
That hashtag was among the top hashtags trends in Egypt for several hours including #Alexandria , #Shit_You_drown_us and #Alexandria_is_drowning.
Ironically, the Pro-Sisi supporters are now seizing the opportunity to pinpoint the fact El-Messirry failed to manage Alexandria because he is a civilian man and not a military man.
Well, it turns out that most of Alexandria’s districts are headed military men  !!!
I think it is fair enough that both civilian El-Messiry and the military districts heads failed miserably.

El-Messiry resigned from his position as the governor of Alexandria and the PM accepted his resignation.
I can not forget at the same time the Centralized government in Cairo and its role !!
President El-Sisi gave his order to his PM Sherif Ismail to follow the matter. 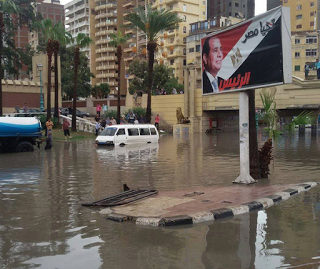 Ismail has ordered for investigation in to the death of those people in Muharram Bey Tramawy accident.
I think today’s images from Alexandria won’t foreign investors to invest in the famous coastal city.
Oddly enough , there are other scenes in Alexandria that would force you to smile despite the sadness.
Ducks swimming freely in the street.

That citizen who made a business from helping the people to cross the drowned street for LE 1.50 at Misr train station earlier today.This video was shot by Mohamed Elkut.
Boats in Bahary district to transfer the citizens. 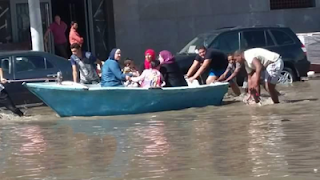 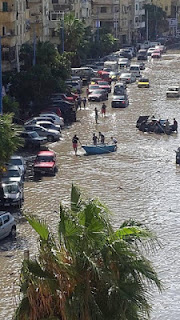 Now all the attention is focused on Alexandria but other governorates are suffering away from the media and cameras like Suez , Kafr El-Sheikh and Behaira.
By the way, Beirut had a share from that thunderstorm. Now the streets of Beirut are flooded with river of garbage.
From Alexandria to Suez to Beirut , I want to say to our dear Egyptian and Lebanese governments: You stink !!