Solomon Schechter and the lost years of Egypt | The National 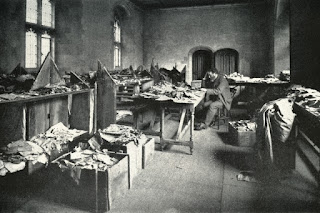 Solomon Schechter, whose discovery in 1896 of a trove of historic documents in Cairo’s Ben Ezra Synagogue is featured in the new British Museum exhibition. Lebrecht Music & Arts / Corbis

Solomon Schechter and the lost years of Egypt


In December 1896, Solomon Schechter, a 49-year-old Moldavian-born lecturer in Jewish studies at Cambridge University, made the long and arduous journey from the tranquility of the English city to the teeming back streets of Old Cairo.

His objective was the Ben Ezra Synagogue – or, rather, a neglected, windowless room within it and the priceless, centuries-old secrets he believed it held.

Built on the site of a Coptic Christian church soon after the Muslim conquest of Egypt in 642AD, the building had been continuously in Jewish hands for more than 1,200 years.

Schechter had been drawn to it by a steady stream of rare manuscripts that had found their way to academics in Europe. Their source, he had learnt, was the historic synagogue’s genizah – a sacred storeroom where texts that might include the name of God were kept pending ritual burial.

In an account published in The Times in August 1897, Schechter writes about finding the genizah at the end of the synagogue’s gallery, accessible only by ladder. Astonished, he describes “a battlefield of books … in which the literary productions of many centuries had their share”. Some of the documents, he recalls, “have perished outright, and are literally ground to dust in the terrible struggle for space, while others, as if overtaken by a general crush, are squeezed into big unshapely lumps”.

Painstakingly, Schechter set about extracting and saving what he could. In the end, he shipped back to Britain 193,000 fragments of documents written in Hebrew, Judaeo-Arabic, Aramaic and Arabic. What became known as the Taylor-Schechter Genizah Collection found a home at Cambridge University Library where work began on it in earnest in the 1970s. The collection contains sacred scriptures and a vast array of personal letters, legal documents and other everyday material that sheds light on an underappreciated era of Egyptian and Islamic history.

A handful of these documents forms the grand finale of a new exhibition at the British Museum in London. Egypt: Faith After the Pharaohs is the first major international show to tell the story of the 1,200 years of Egyptian history from the death of Cleopatra and Mark Antony in 30BC through the transition first to majority Christian and then to Muslim identity, culminating in the end of the Fatimid dynasty in 1171AD.

This period of the country’s history has been neglected, by academics and the public imagination alike, says exhibition curator Elisabeth O’Connell, assistant keeper in the British Museum’s Department of Ancient Egypt and Sudan.

“Egypt’s pharaonic past has certainly captured the imagination, and rightly so, of generations of people,” she says. In short, what came next was overshadowed by the sheer physical presence left on the landscape by the pharaohs.

“The focus has very much been on that stone monumental building phase of Egypt’s history, and later subsequent mud brick remains and things that are not monumental are much more easily disregarded and, in fact, on the ground swept away.

“In the past few decades Egypt in particular has begun to prioritise Christian and Islamic material culture on the same level as pharaonic and that’s been a very welcome development.”

Early Victorian archaeologist-explorers began carting Egyptian artefacts back to Europe by the shipload in the early 19th century – the Rosetta Stone entered the collection of the British Museum in 1802 – and the subtler cultures that succeeded the Pharaohs fell victim to contemporary fashion and prejudice.

“That was true of Islamic and Byzantine Egypt,” says O’Connell. “Anything that was mud brick, including, in fact, pharaonic structures on earlier stone structures, was simply removed [in the hunt for] some sort of idealised original monument.”

The excavation and rebuilding of the temple of Pharaoh Hatshepsut, who ruled Egypt from about 1473BC until her death in 1458BC, is a classic example of such idealisation in practice.

Situated at Deir Al Bahri near Luxor on the west bank of the Nile, the temple was excavated in 1893 by Swiss Egyptologist Henri Naville, assisted by a youthful Howard Carter (who two decades later would discover the tomb of Tutankhamun).

The completely reconstructed temple is now a major tourist draw. But photographs taken in the early 20th century show little more than a pile of rubble at the site, and today there is no sign of the Coptic monastery that replaced it and stood there for centuries.

“You have to look at photographs from the late 1800s to see the tower of the monastery,” says O’Connell. “It was all swept away by the Egyptologists.”

Only the name remains – Deir Al Bahri is Arabic for “Monastery of the North”.

It is only thanks only to surviving papyri and ostraca – fragments of pottery bearing writing – that we know now this was the site of the Monastery of the Holy Martyr Phoibammon, from the end of the sixth century until it was destroyed by archaeologists in the 19th.

It is, says O’Connell, “one of the richest places to look at the economic and social history of monasteries in the early Islamic period, between about 600 and 800 AD”.

It is a remarkable slice of history to have been overlooked, not least because it tells a story of peaceful co-existence between Christians and Muslim that is starkly at odds with received historical wisdom.

Though many of their structures have not survived, the words of the first Muslims to occupy Egypt have outlived their physical presence and that, says O’Connell, owes much to luck and a change in the tide of academic research.

The luck comes in the form of Egypt’s arid climate, which has helped to preserve documents for centuries. And only recently, she says, “has the discipline of Arabic papyrology fund some serious advocates at least in Europe and North America”.

The neglect of this field “goes back to the prioritising of Pharaonic culture over later periods. Very often the same sites that had Greek and Coptic papyri also had Arabic papyri, but it wasn’t privileged by the classicists or Egyptologists, who were able to raise money by saying they had potentially the earliest fragments of Christian gospels or classical texts”.

Thankfully, “the rubbish heaps of ancient and medieval towns in Egypt have preserved the earliest fragments of scripture, legal documents, letters, school exercises and other texts showing how religion was lived”.

Among the items on show will be official letters, including one from Emperor Claudius (10BC-54AD) concerning the status of Jews in Alexandria, and another from a mosque to the half-sister of the Fatimid Caliph Al Hakim (985-1021AD), demonstrating relationships between state and religion.

And, as Islamic, Christian and Jewish texts survived side by side, so did the people of the three faiths.

The co-existence of the Mosque of Amr, built by the Arab conqueror of Egypt ‘Amr ibn al-‘As after the invasion in 641AD, the monastery at Deir Al Bahri and the Ben Ezra synagogue attests that this was a time when Christians and Jews lived easily alongside their Muslim leaders.

Fittingly, the exhibition opens with three sacred texts, placed side by side – a Hebrew Bible, a Christian New Testament and a Quran.

“What we get from the historians, as always, just like our headline news today, is all about conflict,” says O’Connell. “But the documents in particular from these periods show us that most people just got on with things.”

One such document on show – one of six taken from the genizah collection, dating from the ninth to the 13th century AD – is a letter from one Jewish trader to another, recommending the services of a Muslim colleague.

On one level, it is a simple account of everyday commerce. On another, it tells the broader story of an all-but-forgotten time when faiths co-existed in a part of the world today riven by sectarian strife.

“I think the lesson for our audiences,” says O’Connell, “is that the historians’ narrative of conflict has to be balanced with the relatively peaceful co-existence of everyday life.

“The exhibition doesn’t seek to be prescriptive, but I think and hope that some people will be surprised.”

• Egypt: Faith After the Pharaohs is at the British Museum until February 7. To find out more, visit www.britishmuseum.org

Jonathan Gornall is a freelance journalist based in London