DH Fellow Prof. Rita Lucarelli Developing the Book of the Dead in 3D 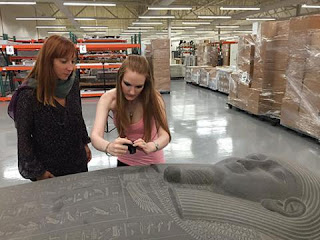 DH Fellow Rita Lucarelli, Assistant Professor of Egyptology in the Department of Near Eastern Studies, researches religion, magic, and funerary culture in ancient Egypt. Her current work engages the Book of the Dead and how it is adapted to various artifacts. Lucarelli’s digital project focuses on creating highly detailed, annotated 3D models of these funerary objects to better understand the materiality of the Book of the Dead texts.

For someone interested the materiality of the text, there are limitations to working with traditional publications of these texts, Lucarelli explained. Many collections of ancient Egyptian funerary compositions only include a transcription of the hieroglyph and perhaps a single photo of the object. These editions do not usually provide the type of detailed photographs that would aid Lucarelli’s research. Visiting these collections, scattered around the world, to examine the objects in person, is expensive and time-consuming. Furthermore, Lucarelli’s artifacts of interest, coffins, require additional assistance from collections staff to examine and document.

Lucarelli is currently working with research assistant Ashley Jerbic, a senior undergraduate in History of Art and Art Practice, to prepare the models. Having captured 2000 RAW-format photos of the first coffin, Jerbic is working to select images for eventual photogrammetric processing using Photoscan. The 3D model will allow users to examine all surfaces of the coffin.

Lucarelli’s work will contribute to the Immersive Humanities project at UCLA, which is developing a platform for 3D models enriched with annotation. Lucarelli and her collaborator, Kara Cooney, Associate Professor of Egyptian Art and Architecture at UCLA is the Department of Near Eastern Languages and Cultures, will combine their efforts to model ancient Egyptian coffins and serve as a case study for the platform.

Lucarelli hopes to expand this photogrammetric work to smaller objects, such as stauettes and vases inscribed with the Book of the Dead. In her new role as Assistant Curator of Egyptology at the Phoebe A. Hearst Museum of Anthropology, Lucarelli contributed to a successful crowdfunding campaign for installing “The Doctor”, a 3000 ton stone sarcophagus for Psamtik, a chief physician in ancient Egypt. A 3D model of the coffin and interactive displays installed at the Hearst will allow members of the public to examine the various spells inscribed on the coffin. In her role as Assistant Curator, Lucarelli will continue exploring a variety of methods and programs for highlighting the rich collections at the museum.

Photo courtesy of the Hearst Museum