Seeking the unfolding of more secrets of the 4500 years old buildings, an exceptional cooperative scientific mission was launched October 25, 2015, under the authority of the Egyptian Ministry of Antiquities. The mission is designed and coordinated by the Faculty of Engineering of Cairo and the French HIP Institute (Heritage, Innovation and Preservation). Two renowned universities; Université Laval of Quebec and Nagoya University of Japan also participate in the mission whose goal is to probe the heart of the largest pyramids of Egypt without drilling the slightest opening. The most innovative techniques like Radiographic muons, aka cosmic particles, infrared thermography, photogrammetry, scanner and 3D reconstruction will be used by the mission's team work.

The conference started with a welcoming statement by Dr. Mamdouh Eldamaty to the participants and audients stressing the importance of the Old Kingdom period with relation to its magnificent buildings that still confuse the Egyptologists all over the world. Eldamaty declared that 2016 will be the "Year of Pyramids", many researches and cultural events will focus on the huge buildings.

As a representative of the Faculty of Engineering, Cairo University, Dr. Hany Helal pointed out that the cooperation between the Ministry of Antiquities and the Faculty of engineering is old. Many architects and restorers have participated in discovering, maintaining and restoring ancient buildings using the latest technologies known. He finally hoped that in the longer term, given the archaeological wealth of Egypt, an application of these techniques to other monuments will take place,

Dr. Hesham Za'zou, Egyptian Minister of Tourism spoke about the importance of this mission and the scientific applications on the archaeological sites in relation to increasing the number of tourists coming to Egypt.
Mehdi Tayoubi, HIP Institute president and co-director of the mission said that the aim of the mission is to form a team of international experts then discuss and confront the theoretical and technological approaches to the archaeological ground reality. He added that the mission should last at least until the end of 2016 hoping that this contribution prepares the path for future scientific research missions.
On the other hand, Matthew Klein, representative of Laval University- Canada elaborately explained the "Infrared thermography" technique giving examples from other scanning performed in an Italian church. He said that infrared thermography, implemented by Jean-Claude Barré (LedLiquid) is one of the most promising methods to try to understand, looking from the outside, what happens inside a monument just behind the faces. The principle is simple but its implementation requires sophisticated instruments and highly experienced operators. This technique is based on a physical law: all materials are emitting an energy radiation in function of their temperature. They emit infrared waves measured by cameras equipped with sensors. Thanks to a digital model, the cameras generate images where each color corresponds to a given temperature. Widely used to reveal heat loss in poorly insulated homes, it allows locating the presence of defects in buildings. Thus, a cold air current will be represented in blue, whereas a heat source in red. These specialized cameras are also capable of quantifying the emissivity of materials. No materials absorb, transmit, nor reflect radiation in the same manner. Direct application for the pyramids: the differences in emissivity allow to verify if the surface of stones, which have now the same color due to bad weather, sand and pollution, are similar. “But what interests us most are potential cold spots on the surface, which could be drafty, therefore reveal cavities, rooms or hallways, within the monuments.
The goal is to realize a true thermal map of the giants in Dahshur and Giza. A dynamic map, as the pyramids, like any building, will absorb the sun’s heat in the daytime, and restore it during the night. The operator’s program is therefore to make images on the four sides of the pyramids half an hour before sunrise, when the monument, having evacuated maximum energy during the night will be the coldest. And from this point 0, which will serve as a standard, he is planning to repeat the operation at noon and evenings. In a few days, Jean-Claude Barré will record hundreds of thousands of images that will be compared with each other by a computer program.
The pyramids may finally reveal some of their secrets, in blue or red!

Experts from KEK (High Energy Accelerator researchOrganization, Fumihiko Takasaki and Kunihiro Morishima from Nagoya University explained the technique of "Muons Detection". Muons come from the upper layers of Earth’s atmosphere where they were created from collisions between cosmic rays of our Galactic environment and the nuclei of atoms in the atmosphere. They fall to the ground at nearly the speed of light with a constant rate of about 10,000 per m2 per minute. As for the X-rays passing through our bodies allowing to visualize our skeleton, these elementary particles, like heavy electrons, can very easily pass through any structure, even large and thick rocks, such as mountains. Detectors, placed at appropriate places (e.g. inside the pyramid,
under a possible yet undetected chamber) allow, by accumulation of muons over time, to discern the void areas (that muons crossed without problem) from denser areas where some of them were absorbed or deflected. The difficult aspect of this technique is to create highly sensitive detectors - either gels like for traditional pictures emulsions or scintillators. Then to accumulate enough data (in several days or months) to emphasize the contrasts. Muons radiography is now frequently used for the observation of volcanoes, including research teams from the University of Nagoya. More recently KEK developed a detection approach based on electronic scintillators which are resistant to nuclear radiation, unlike chemical emulsions, in order to scan inside Fukushima.

Finally Yves Ubelmann of Iconem explained the photogrammetry and laser techniques saying that Dahshur and Giza plateau will be reconstructed in 3D, with all their monuments, pyramids,temples, Sphinx... To achieve this ambitious goal, Yves Ubelman of Iconem will combine two technologies: photogrammetry ... and drones! At the basis of photogrammetry, there are computer algorithms. They allow, from a large amount of images taken from different viewpoints, to reconstruct a relief object. The algorithms used by Iconem were developed by INRIA. The great novelty- already developed by the company Iconem in Pompeii, Syria and Afghanistan, to restore threatened sites - is that the cameras will be shipped aboard unmanned flying vehicles.
For this mission, Iconem will use two types of drones. “First, drones with wings like airplanes, explains Yves Ubelman. Thanks to their autonomy, they will allow us to obtain the data of large areas and reconstruct the pyramids’ environment with details up to 5 centimeters.” This will allow us to position all the monuments very precisely and to identify levels, slopes and possibly traces of ancient ramps of construction paths. “The details of this micro-topography will also give us clues about the position or shape of unexcavated buildings that are visible only thanks to the shape of the ground.”
The second type of drones looks like helicopters. They have less autonomy but can achieve hovering, take images just meters from the monuments, from highest to lowest and track their grades. The results will be this time detailed on a centimeter scale. This high definition will provide geometric information, especially alignment and assembly of the blocks. But also texture and possibly traces of tools or construction gestures. “Photogrammetry allows to work and combine different scales, exploited in the same digital model, and propose a global interpretation of the sites,” concludes Yves Ubelman. To complete this mission, his team will also perform laser scanner analysis
inside the monuments, in confined and dark places where photogrammetry is not operative.


(c) Ministry of Antiquities, Press Office
Eman Hossni
Based on the Mission's Report 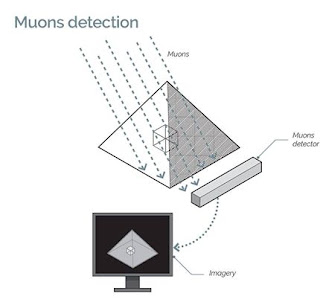 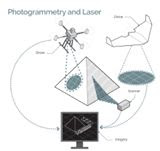