Still not holding my breath ... 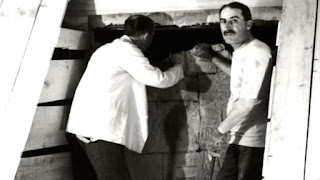 NINETY four years ago, Howard Carter opened Pharaoh Tutankhamun's tomb and exclaimed "wonderful things". Now an Egyptian minister is promising his hidden chambers "will be a Big Bang — the discovery of the 21st century".

It's not the first time government officials have become excited at the tourism potential of hidden treasure.

In September last year, a Polish ministry of culture official declared he was "99 per cent certain" a buried Nazi train had been found under a collapsed siding in that nation's southwest. The evidence seemed sound: You could make out the shapes of tanks apparently outlined by ground-penetrating radar.

It turned out to be a hoax.

"We do not know if the burial chamber is Nefertiti or another woman, but it is full of treasures," he reportedly told Spain's national newspaper ABC.

A recently released documentary by Egypt Exploration Society director Chris Naunton is also ramping up the tension — though nowhere near to the same extent: "It's the biggest archaeological news from Egypt — or anywhere — for at least a decade."

But we'll have to wait until April for the big reveal.

At the very least, minister Zaazou has confirmed a formal announcement will be made then. 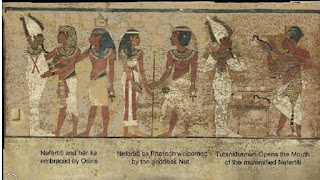 The paintings on the burial chamber wall believed to conceal a doorway to another room. Source: Nicholas ReevesSource:Supplied 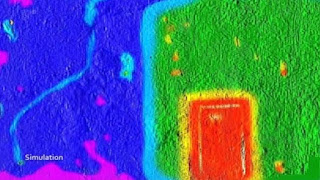 A simulation of a radar scan of the same scene, showing the suspected location of the false wall. Source: Channel 5 / King Tut's Tomb — The Hidden ChamberSource:Supplied

From this, and the numerous 'repurposed' treasures once belonging to Queen Nefertiti bundled among Tutankhamun's possessions for the afterlife, he postulates that these false walls may hide the remains of the queen herself.

DELVE DEEPER: In search of Nefertiti

Reeves' reputation was such that the idea was not immediately dismissed as that of a crank.

An assembly of Egyptologists in Cairo resolved to take a closer look: Tut's tomb had been due to be closed for preservation work anyway, and the necessary equipment for a non-invasive study was in town for the impending "Scan Pyramids" project.

Then, in November, the ground-penetrating radar returned results which indicated a 'high probability' that there were cavities behind the suspected plastered-over doorways.

When the survey was announced, Egypt's antiquities ministry declared the chance of their actually being a chambers behind the walls was "90 per cent".

"Reeves has founda wall behind the tomb of Tutankhamun leading to a room where there is proven to be metals, stones ... it is full of treasures," he told the Spanish newspaper. "Imagine what will be there ... We are working on it and in april we will announce the news to the world." 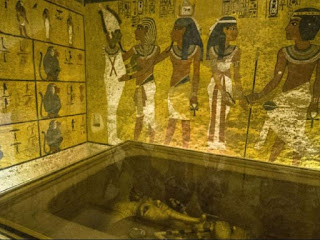 Since the apparent discovery of the hidden doorways, archaeologists have been pointing out a series of anomalies in the tomb which has been bothering them quietly for decades.

First, the entrance chamber to a Pharaoh's tombs always take a left turn. It was a symbol of masculinity.

Female queens took a distinctive swerve to the right.

So too does Tutankhamun's.

It was also odd that so many of Tut's treasures contained female images — including the most personal of objects, the Canopic jars which preserved his innards.

Traditionally, they were supposed to show his face so that he would recognise that the body parts belonged to him.

Then there was the way Nefertiti's name appeared to have been over-stamped by Tutankhamun's own. This can be seen on items ranging from ceremonial chest plates through to his famous death mask itself.

Some archeologist now suggest Tutankhamun's unexpectedly early death at age 19 put the priests into a flat panic. They had a traditionally limited 70-day time frame to conduct the rituals and preserve the body.

His tomb was nowhere near ready.

So they sealed off part of Nefertiti's, broadened a passage into a burial chamber, and hurriedly painted the walls to suit the boy king.

The rushed brush marks — and mould on paint still wet when the tomb was sealed — is still evident. 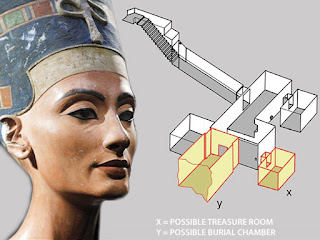 Nefertiti, as wife of the heretic king Akhenaten, was supposed to be buried in her husband's capital city of Armana. But her tomb lies unfinished.

Scant surviving evidence suggests she may have ruled as Regent for several years after his death, guiding Egypt through religious turmoil as her young son or stepson — Tutankhamun — grew to maturity.

Some archaeologists suggest her tomb was looted as part of the process of equipping Tut for the afterlife. The evidence for this is the already mentioned 'repurposed' treasures and artworks.

Others believe a body already in the Egyptian museum, found rudely bundled with those of other unpopular rulers in a nearby disused tomb, may be that of the famous queen.

The mummy may even have been ripped from her funerary chambers and dumped there as her son was being interred in her place.

Only a look behind the sealed off walls offer any real opportunity for revelation.

Getting permission to drill even a small hole for an optic-fibre camera will likely be difficult.

And it remains possible there is nothing there at all.