Warrior queens, beautiful princesses and gentle Hathor: various aspects of women in ancient Egypt
With Mothers’ Day coming up, and of course International Women's Day, I thought it might be fun to take a quick peak at the varied ways in which women, human and divine, were depicted in ancient Egypt.
There do seem to have been stereotypes, such as the gentle Bastet vs aggressive Sekhmet trope. And, generally, it seems as though women were expected to be meek and gentle. But things are totally two sided. 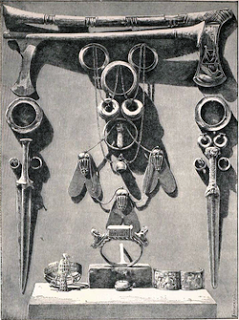 While women did not enter the army, at times queens do seem to have been buried in ways suggesting warrior attributes. First there is the possible warrior queen, Ahhotep II. Her tomb was discovered in 1859 at Dra Abu el-Naga, Thebes and her coffin bears the title ‘King’s Wife’. Ahhotep II was buried with a dagger and battle axe, as well as three golden fly pendants. You can see a picture of that here, it is from the Wikimedia page about the lady. Such pendants were given as awards for military valour, because good warriors were like flies - persistent, impossible to ward off and numerous! Although the dagger and battle-axe found in the tomb are usually associated with her, they do not actually bear her name and since the Dra Abu el-Naga tomb was not her original burial place, it is possible that the objects belong to another person altogether. The axehead shows Ahmose smiting his enemies. However, the golden fly jewellery was closely associated with the queen, as the pendants were found inside her coffin. Unfortunately, we don't have any golden fly ancient Egyptian necklaces in the Centre, but you can get a replica from our shop!
Another Ahhotep, Ahhotep I, is also credited with aggression. She was the mother of Ahmose, honoured in a stela at Karnak as ‘one who pulled Egypt together, having cared for its army, having guarded it, having brought back those who fled, gathering up its deserters, having quieted the South, subduing those who defy her’.
These two Ahhoteps were queens in that they were royal women. They did not however, rule in their own right as kings did. In ancient Egypt only a few women reigned in the way king’s did, and these include Sobekneferu, Hatshepsut and Cleopatra VII.
Queens ruling in their own right were endorsed as real kings partly through use of the warrior image since the king is shown as engaged in warfare in order to maintain cosmic order. Thus, the king’s title ‘Lord of Doing Things’, occurs on many items of warfare in Tutankhamun’s tomb. The feminine version of the title is used by only two women, both of whom ruled as kings, Sobekneferu and Hatshepsut. Hatshepsut herself took part in at least two military campaigns, but whether or not she led from the front, as kings claim to have done, is unknown. 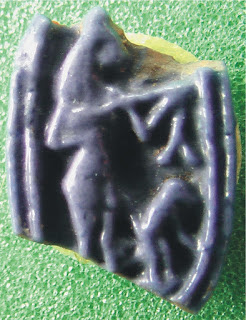 In contrast we have the beautiful princess trope. Georgia Xekalaki, in particular, has written about the role of princesses in ancient Egypt. Of course there role changes over time; but, as one might expect, the role of the princess was usually a ritual one, and often to support and revive the king through her youthful beauty. So for example, In the Twelfth Dynasty Tale of Sinuhe, they are said to welcome the hero with their sistra. On depictions of New Kingdom sed festivals, festivals of royal revival, the royal daughters appear in processions carrying sistra. The named daughters of Rameses II are shown in the Great Temple of Abu Simbel shaking sistra.
In popular literature, the most famous royal daughters are those of Akhenaten and Nefertiti. They are shown in Amarna art as childlike (even when the date of the works suggests they must have been adults). Sometimes they are shown playing musical instruments. It seems that in private tombs daughters were sometimes shown in a similar way, reviving guests and their parents and funerary parties. They play musical instruments and serve wine. The picture of the rig bezel on the right shows a young woman playing a lute. The bezel is from Amarna and may well have been connected with festivals of revival. 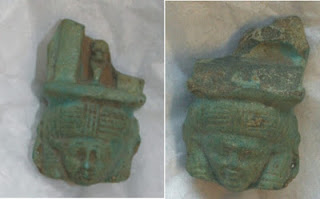 There is also the gentle Hathor trope. Hathor was, for most of Egyptian history, the most important goddess, with more temples built to her than any other deity. Because of her gentle nature she is sometimes depicted as a cow, and no, cows did not have the same metaphoric values in ancient Egypt as they do today! Cows were considered loving, gentle creatures. Hathor was also a goddess of minerals and the eastern desert, she was linked to other worlds and associated with music and dance. She was even a goddess of drunkenness. Here you can another object from the Egypt Centre's collection, it is part of a sistrum, the two sides are shown. A sistrum was a kind of rattle. It shows the goddess Hathor; but look carefully at her ears. They are cow's ears showing her cow-like attributes.
There is also a story which suggests that although goddesses might seem one-sided, their nature could change. The story of the quarrel between Hathor and her father, and her later return, exemplifies this. There are several versions of the story.
An early version of this myth is extant on the Book of the Heavenly Cow, which first appears, though in incomplete form, on the outermost of the four gilded shrines of Tutankhamun. The story, called ‘The Destruction of Humanity’, goes that, in times past, a golden age existed when humans and gods existed under Re, and night and death did not exist. Humanity plots against Re and the god sends his daughter, the Eye in the form of Hathor, to kill them all. ‘Hathor, the Eye of the Sun, went into the desert transformed into the raging lioness Sekhmet, the powerful one. There she began slaying humanity for the evil they had done’. She goes on the rampage wading in their blood. Re changes his mind, but no one knows how to stop the furious goddess, so he orders 7,000 jars of beer to be made and coloured with ochre. Thinking that this is blood, the goddess drinks, and then in a drunken stupor, becomes happy and pacified, with all thought of killing forgotten. Once again, she is the beautiful and gentle Hathor. Her return to Egypt is celebrated by song and dance and drinking. Re returns to the sky on the back of the heavenly cow and institutes the netherworld as a dwelling for the dead.
There are several variations to this myth: in one version Hathor becomes cross with Re and that is why she storms off to Nubia. Thoth has to coax her back by telling her stories. She bathes in the Nile, which becomes red with her anger, and then she becomes peaceful and happy. In other variations, it is Tefnut who goes to Nubia and Shu who brings her back.
So then there are at least three different types of women which we can see through ancient Egyptian literature and archaeology.
Xekelaki, G. 2007. ‘The Procession of Royal Daughters In Medinet Habu and their Ritualistic Role: Originas and Evolution.’ In Proceedings of the Ninth International Congress of Egyptologists. Grenoble, 6-12 septembre 2004. II edited by J-C. Goyon and C. Cardin, C. Leuven, Paris and Dudley MA: Uitgeverij Peeters, 1961–1965.
Xekelaki, G. and el-Khodary, R. 2011. ‘The Cultic Role of Nefertari and the Children of Ramesses II.’ In Ramesside Studies in Honour of K.A. Kitchen edited by M. Collier and S. Snape. Bolton: Rutherford Press Ltd., 561-571.