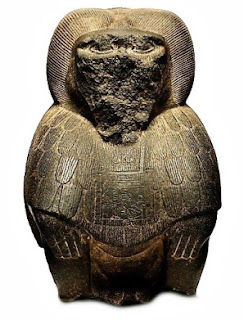 This imposing (65cm high) black granodiorite statue represents the god Thoth as a baboon (Acc. no. 1785). Damage to the baboon’s muzzle has resulted in a rather forbidding impression, although Thoth was appealed to as a god of wisdom and of healing.

The statue has until now been dated to the New Kingdom, following archaeologist W.M. Flinders Petrie’s 1894 publication of finds from the site of Coptos, just north of Thebes. Several of the finds unequivocally dated to the reign of Ramesses II and so Petrie assumed the baboon to be of that period as well. However, the reading of the unusual name of the donor of the statue – a High Priest of Amun, named in an inscription within a pectoral carved on the baboon’s chest – has always puzzled me.

Petrie read the name of the donor as ‘Iua-Mer’ but did not publish a photograph of the statue or a copy of the inscription in the excavation report. Perhaps as a result it does not appear in a standard reference work of monuments, the Topographical Bibliography of Egyptian Hieroglyphic Texts. Unless someone had visited Manchester, it is unlikely they would know what the statue looked like. 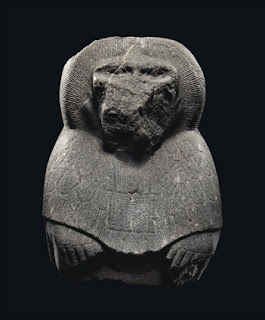 By chance, whilst perusing a Christie’s sale catalogue for an auction held on Thursday 2 May 2013, I happened upon the perfect doppelganger of our piece: a granodiorite baboon statue, identified as having been dedicated by a 22nd Dynasty high priest of Amun named Iuwlot. The unusual name, combined with a rare combination of hieroglyphic signs in its spelling mean there can be no doubt that this is the same man as dedicated our almost identical statue. Unsurprisingly given its apparent lack of publication, the author(s) of the Christies catalogue entry were unaware of the Manchester baboon.

Iuwlot is an intriguing but little-known character. He was the son of the Libyan king Osorkon I, and held the important title of High Priest of Amun at Thebes. He is attested from five other inscribed objects: two Nilometer Texts (no. 20 and 21), a stela from Thebes (British Museum 1224), a stela in Moscow and finally the so-called Stèle de l’apanage in Cairo. 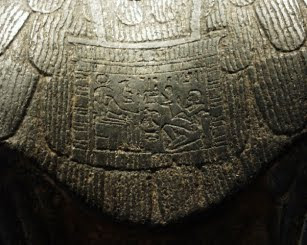 In the vexed subject of ancient Egyptian chronology, especially of the Third Intermediate Period, all attestations of named and titled individuals count. Two new records can now be added for Iuwlot in the form of the baboons from Coptos – as the Manchester one has a firm provenance, it is likely that they were set up as a pair, perhaps to flank a temple doorway at Coptos. Interestingly, Iuwlot’s son Wasakawasa is known from an electrum pectoral dedicated to Thoth, Lord of Hermopolis (Petrie Museum UC13124), perhaps implying a particular family regard for this god.

These baboons may have been carved much earlier and have been repurposed by the 22nd Dynasty royal family. Other monumental elements, such as granite jambs of Tuthmose III, were reused by Osorkon I at Coptos, and such reuse is widely attested in ancient Egypt.

This is proof, yet again, that even well-visited objects on display can hide secrets in their stories.

Our baboon can be viewed in our award-winning ‘Gifts for the Gods: Animal Mummies Revealed’ exhibition tour.