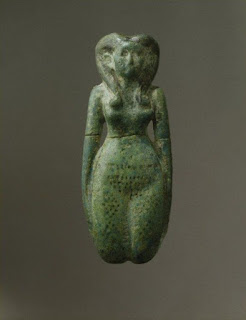 A seven-year-old boy on a trip with friends happened to move a rock while ambling around the Canaanite archaeological site of Tel Rehov and found a beautifully preserved 3,400-year-old female figurine.

Cleaning off the mud coating the clay sculpture, which is about the size of two adult fingers, Ori Greenhut found the well-preserved carved form of a naked woman, featuring a narrow waist and apparently an ornate hairdo. He took it home, and the Greenhut family, which lives in the nearby communal settlement of Tel Te'omim, turned it over to the Israel Antiquities Authority.

"We explained to him that it was an ancient object and that the Antiquities Authority would take care of it for everybody's benefit," says his mother, Moriya Greenhut.

Archaeologists are mixed as to whether the figurine is an idol of a fertility goddess, such as Astarte, or depicts a living woman of the time. "It could be either one," Yardenna Alexandre of the Israel Antiquities Authority told Haaretz.

The image has none of the hallmarks sometimes found with depictions of goddesses. "She has no crown, for instance. She looks completely natural, which is why she could be either one, a goddess or a picture of a real woman," says Alexandre.

A great many figurines depicting females, some carved in stone and some in etched on bronze, have been found in the region, Alexandre explains: some are very clearly goddess idols but some could well be portraits of women that lived at the time. This one had been made of clay that was pressed into a mold, says the Israel Antiquities Authority.

"Evidently the figurine belonged to one of the residents of the city of Rehov, which was then ruled by the central government of the Egyptian pharaohs," commented Amihai Mazar, professor emeritus at Hebrew University and expedition director of the archaeological excavations at Tel Rehov.

Figurines depicting beefier women were typical of even earlier eras, explains Alexandre. "For this period, the late Bronze period of 13 to 15 centuries BCE, her slimness is typical in figurines," she says.

Given that the piece was found (almost) lying on open ground, rather than associated with a clear archaeological layer, how can its provenance be sure, and how was it dated? The piece is completely typical of its time and is highly, highly persuasive, Alexandre says, adding, "We are not worried that it's a fake."

Representatives of the IAA visited Ori Greenhut's school, in Kibbutz Sde Eliahu, to deliver a certificate of appreciation for his good citizenship in turning over the piece rather than keeping it. Ironically enough, "The archaeologists visited during the Torah lesson, just when we were learning about Rachel stealing the idols of her father Laban," says teacher Esther Ledell. "And suddenly I realized that here we had an idol just like that right in our classroom!"

Tel Rehov, where the figurine was found, was a city in the Jordan Valley that had been occupied for centuries, in the Bronze and Iron Ages. It had also been destroyed at least twice. Not far from the Jordan River, it is just 5 kilometers south of Beit She'an, another major archaeological site.

Among the many discoveries at Tel Rehov were ones relating to Canaanite religious practices, including ancient beehives and ovens and facilities that the archaeologists think may have been used in ritual feasting. They also found large buildings from the 10th and 9th centuries BCE, the times of King David and King Solomon. This latest figurine joins a long list of cult objects found at the site.