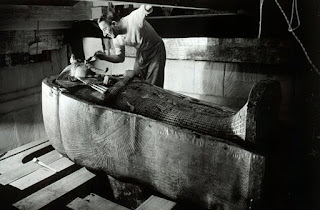 The King Tut mummies is one of the few to be positively identified. Harry Burton/Wikimedia Commons

King Tutankhamun is the only 18th Dynasty pharaoh whose mummy has been identified with certainty, says a new study into some of the most famous ancient Egyptian royal mummies.

King Tut’s great-grandparents, Yuya and Thuya, have also been identified beyond doubt, while different opinions appear to circulate about the identity of almost all the other mummies.

Published in the Yearbook of Physical Anthropology, the research reviews methods and pitfalls used to name the mummies of the famous 18th Dynasty, which includes royals such as Amenhotep III, Akhenaton, Nefertiti and Tutankhamun.

The meta-analysis examines all the procedures used to identify these mummies, such as anthropological examination, genetics, facial resemblance, historic inscriptions, and name tags found directly on the bandages.

"Overall, agreement emerges only for the identities of Tutankhamun and his great-grandparents Yuya and Thuya. Such results demonstrate the difficulties in identifying ancient Egyptian royal mummies," Frank Rühli, director of the Institute of Evolutionary Medicine at the University of Zurich, told Discovery News.

Rühli and colleagues Michael Habicht and Abigail Bouwman focused their investigation on the mummies of the so-called Thutmoside dynasty, from Thutmosis II to Tutankhamun.

Some of these mummies have been recently investigated using molecular genetics in the so-called "Tutankhamun Family project,” carried out by a team recruited by Zahi Hawass, Egypt's former head of antiquities.

The scientists tested 11 royal mummies suspected of being related to King Tut, while five other royal individuals dating to the early New Kingdom (1550-1479 B.C.) were chosen as a control group.

To create a genetic fingerprint for each mummy, the researchers led by Hawass used eight sets of genetic markers. Shared markers helped produce a five-generation pedigree of Tutankhamun's immediate lineage.

Yuya and Thuya were recognized as King Tut's great-grandparents. Pharaoh Amenhotep III and the mummy known as the Elder Lady (KV35EL) were found to be his grandparents, while the skeleton known as KV55 -- most likely Akhenaton -- and KV35YL, the Younger Lady, were identified as siblings, as well as King Tut's parents.

The researchers noted however that the genetic tests would have not been enough in UK and US courts today to claim parentage.

In UK courts at least 10 matches are required, while in North America 13 matches are necessary to claim relationship. The Tutankhamun Family project gave 8 matches.

"It should be said that working with modern genetic material is one thing, analyzing some 3,500 year-old DNA a totally different one. Obviously, it is much more challenging," Rühli said. 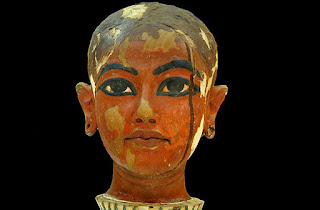 A head statue of Tutankhamun made of wood covered with plaster and then painted. Jean-Pierre Dalbéra /Wikimedia Commons

After reviewing all the possible methods used to name the mummies, Rühli and colleagues proposed their own identification.

They agreed with the genetic tests on the identifications of the mummies of Thutmosis II, Amenhotep III, Yuya, Thuya, Queen Tjye, Akhenaton and Tutankhamun.

The study differs from the genetic research for one identification, that of the mummy CG 61072 or KV35YL, the Younger Lady.

While the body remains unidentified according to DNA tests, Rühli and colleagues present her as Queen Nefertiti.

"We can't be fully certain of her identity, however inscriptional evidence and facial resemblance with Tutankhamun as seen in CT scans, strongly suggests the mummy belongs to Nefertiti," Rühli said.

"Nefertiti is labelled in inscriptions to be Tutankhamun's mother and indeed the mummy known as the Younger Lady is genetically suggested to be King Tut's mother," he added.

If the identification is correct, the theory that Nefertiti is the occupant of a secret crypt behind the western wall of King Tut’s tomb would be automatically ruled out.

In this case, candidates would be other elusive 18th Dynasty mummies, such as the enigmatic pharaoh Smenkhkare, Queen Kiya, the mysterious secondary wife of Akhenaton, and Queen Meritaton, the eldest daughter of Akhenaton and Nefertiti who might have acted as a regent for her underage brother Tutankhamun.

"But it is also possible that no mummy and artifacts at all will be found," the researchers said.