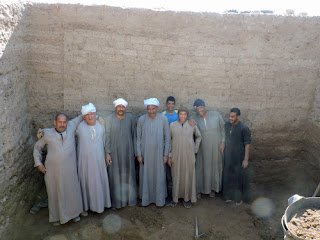 This will be our last posting as we finished excavation on February 14 and have spent the rest of the week on study and recording. We want to thank the Egyptians who did all the hard work of excavating this season. Here they are standing against the east baulk of the western square on our last day of excavation, by which time the square was about 3.5 meters deep. That’s a lot of dirt to move, and they did it with diligence and great cheerfulness.

On the left is the mound of dirt removed from the western square over the course of 5 weeks of digging. The hole is deep enough to be dangerous to anyone visiting the site, so we decided to back fill it once we had done all our recording and photography. The guys worked just as happily putting the dirt back as they had taking it out.

Julia Harvey and Jaap van Dijk leave for home on February 21. We want to give a special thanks to Julia, without whom we could not have handled the enormous amount of pottery found this season. She spent 3 weeks with us, all of it on the pottery mats, in the sun, from 7:30 am to noon (with a half-hour break) 6 days per week—and still managed to smile.

On the left is a group of pottery baskets that Julia has sorted by type of ware, shape, diagnostic pieces, etc. Beside the baskets is a pile of sherds she thought might go together. With great patience and considerable manual dexterity she was able to fit all the pieces together to restore this thin-walled cooking pot. This is but one of the vessels she reassembled. She also found several ostraca among the sherds, which takes a sharp eye. Thank you, Julia.

One of the projects we have undertaken this year is the formal recording of all the  Sakhmet statues remaining in the precinct, of which there are over 250 whole or partially preserved. Richard and I are doing the photography. Of particular interest are the inscriptions on the bases. Sometimes they are crystal clear as on the left, but when the stone is worn the inscription can be hard to see. The cartouche of Amunhotep III in the left photo was erased in the Amarna Period as part of Akhenaten’s general policy of removing the name of Amun wherever it occurred, even in his father’s name. After the Amarna Period, Amunhotep III’s name was sketchily recarved on all his Sakhmet statues.

Aside from handling the registration of all the small objects found (there were 95 this year), Jaap has been putting his superb epigraphic skills to use copying all the Sakhmet inscriptions. Deciphering damaged texts takes patience, skill and a small mirror to highlight damaged areas, and Jaap has all three. As you can see, though, copying texts is not always easy or comfortable.

I finally finished mapping the paving west of the Taharqa Gate (that’s my drafting table in the background). Here is the result. It’s the longest mapping project I’ve ever undertaken and I am relieved it went well.

Since this is our last post of the season, I thought I’d end with one last sunset on the Nile. February 18, when this shot was taken, was one of the rare partly cloudy days in Luxor.