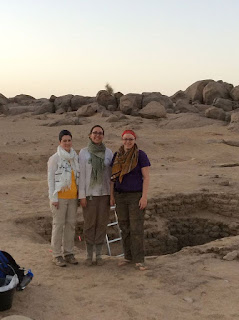 Purdue professor Michele Buzon (left) with two of her students, Katie Whitmore and Sarah Caldwell at an archaeological site in Tombos, Sudan.

Getting a chance to explore people of the past is what a Purdue professor likes best about her line of work.

During the New Kingdom period (1500 to 1050 BCE), Egyptians colonized the region of Nubia to gain access to trade routes on the Nile River. Incredibly, remnants of this civilization still exist, giving Michele Buzon, an associate professor of anthropology, the chance to uncover more information about the relationship between the Nubians and Egyptians.

“My collaborator, Dr. Stuart Tyson Smith of the University of California, Santa Barbara, and I are working on three areas. We’re excavating New Kingdom Period pyramid tombs that come from a time period when Egypt was controlling Nubia,” said Buzon. “Data from these tombs give us a sense about how Egyptian colonists interacted with local Nubians during this time of change and how their lives changed. We’re also looking at the ancient town during this period, but it is difficult since it is mostly buried under the modern town. We are also looking at a native Nubian cemetery called Abu Fatima to get a sense of what the Nubians were like before the Egyptians lived there.”

Buzon discovered archaeology and anthropology when she took a required social science course during her first year of college. She was immediately intrigued.

“Examining cultural identity, health and living experiences of people in the past allows me to pursue interests that I’ve had since I was a child such as history, medicine and foreign cultures,” said Buzon. “My father is a medical doctor and an immigrant from the Philippines. Growing up in a multicultural family that traveled regularly led to my interest in understanding how people interacted in the past.”

The Nubian Desert, which is located in northern Sudan, is not the first place that Buzon did archaeological work. As an undergraduate student at Loyola University, she worked in the Chicago area. Later, as a graduate student at the University of California, Santa Barbara, she did archaeological work in California and Jordan. She first went to Sudan when a new professor in her graduate program was looking for someone with human bone expertise to accompany him on his field project.

“Although I hadn’t intended on focusing on this area for my Ph.D. project, after the field season, I decided the research was really compelling and that I could create a really interesting project,” said Buzon.

Buzon, who is working on her sixth excavation in the Nubian Desert, will be on site until March 3. She and her team are on their second year of a three-year project funded by the National Science Foundation.

More information about the project can be found at www.tombos.org, which includes a blog detailing some of the team’s experiences and discoveries. A post from Feb. 14, for example, describes a heart scarab discovered lying under the neck of a skeleton.

Heart scarabs such as this one were inscribed with a spell from the Book of the Dead to ensure the deceased’s heart would not betray them during their final judgment in the netherworld: “Oh my heart of my mother! Oh my heart of my mother! … Do not oppose me in the tribunal! Do not show your hostility against me before the Keeper of the Balance! For you are my ka which is in my body, the protector who causes my limbs to be healthy! Go forth to the good place to which we hasten!”

According to Sarah Caldwell, a Purdue graduate student studying anthropology who was also a part of Buzon’s team last year, working with Buzon was a great experience.

“She’s very knowledgeable and experienced, and an excellent adviser, and working in the field with her was an absolute blast,” said Caldwell. “Although I have a lot of experience working with skeletal remains in a laboratory context, Tombos was my first experience excavating human remains and we worked together the vast majority of the time, so I learned a tremendous amount more from her in those months.”