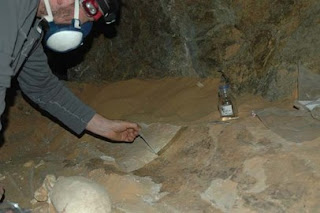 In a subterranean chamber beneath tomb G322, Maickel consolidating a section of coffin remains.

Having left London on 23 January – with a brief stop at Kawa to assess future conservation requirements – I am now in the full swing of the work here at Amara West. Last week we successfully lifted a section of coffin remains from one of the underground burial chambers beneath pyramid tomb G322.

The largest we have found at Amara West so far, measuring about 45 by 90cm, it probably formed part of the side or base of the wooden coffin. The wood and painted plaster was unfortunately in a poor state of preservation: all we could see was brown and white powder stains.

We decided to consolidate in situ using a diluted adhesive in case any remains of painted decoration had survived. If lifted in a block we can try to turn it over and expose the underside. The consolidant will in the first instance also stick to sand and whatever else is underneath together. So a good deal more work will follow to remove that: there is no guarantee for a painted surface, it may all have deteriorated into powder already… yet this is the only way to find out. Some smaller sections from the area extending towards the head had already shown that the coffin was decorated. 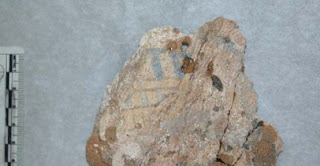 In the meantime other fragile finds have been gathering on my desk at the workroom: worked wood, worked ivory/bone, bitumen and textile remains, a metal pin…

A number of fragile finds are awaiting assessment and treatment.

Last but not least a copper alloy mirror with remnants of textiles adhering to it was discovered by Mohamed Saad earlier this week. This, and other objects, will each get their dose of attention in the next few weeks. 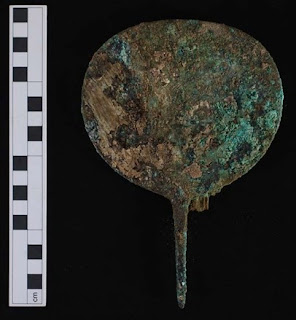 Alongside regular updates on the blog, follow the season on Twitter: @NealSpencer_BM and #amarawest. For more images, visit instagram.com/nealspencer_bm