General Supervisor of the Repatriated Antiquities Department, Sha'ban Abdel-Gawad added that the Antiquities Ministry in collaboration with the Egyptian Ministry of Foreign Affairs and other concerned authorities managed to stop selling the statuette after it was seen displayed in Aton Gallery in Germany. The 4.8 statuette, added Abdel-Gawad was stolen from an archaeology store in Aswan and it represents a standing man holding a deer or gazelle over his shoulders.
© Ministry of Antiquities, Press Office
Wrote: Asmaa Mostafa
Translated by: Eman Hossni 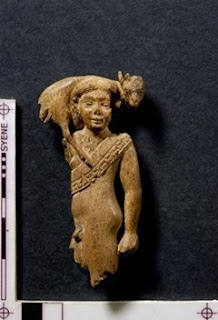