Amara West 2016: a villa and its surroundings

Panorama looking up towards the ancient town

The focus of work this season lies in the cemetery area: the town is almost entirely deserted. Well, not entirely: one small group of daring archaeologists withstands the bitter cold and strong winds to investigate … a series of small walls.

Today we were six people in the town area, the highest number so far this season. Alongside Tomomi Fushiya and Ariadna Balbastre drawing plans of a suburban house (D11.4), three of our workmen – Ahmed Medani, Hassan Nouri and Fouad Ali Gindi – are helping me seek further insights into details of life in this late New Kingdom town.

This small team is focusing on several areas. To the south of the large house D11.1, already excavated last season, we are now focusing on cleaning a large area – courtyard? – in front of the house, as the site slopes down towards the Nile. This has proved difficult, as very strong winds have been blowing sand back into the excavated areas. 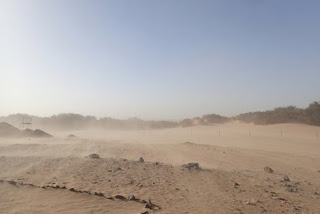 The wind howls across the lower part of Amara West town

In the northern part of the courtyard more garden plots have emerged. Many of these rectangular structures, made of mud ridges and likely to designed to contain vegetables or other plants, have been found. This year, for the first time, we discovered small pits within them and one of them contained the stalk of a smaller tree or bush. Botanical analysis should be able to tell us what sort of plant was growing here.

Apart from the garden plots, the remains of seven ovens and ash pits around the courtyard have been excavated one by one: all displaying varying shades of white to grey to black and red. The remains of a bread mould – and the typical cylindrical ceramic construction – indicate the function of at least some as bread ovens, though some of the ash pits may have been simple hearths, or pits associated with producing charcoal. 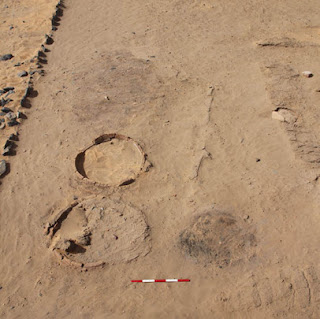 Ovens in the courtyard in front of house D11.4

Slightly to the southeast of villa, D11.1 two small mud brick walls were cleared. Parts of them were covered by our own spoil heaps from last year (luck of the archaeologist) and windblown sand, so the workmen had to dig through a metre of pure sand and sieved excavation deposits. These walls are distinctive, as they run at an acute angle towards each other and have little bastions projecting into the space between them. By cleaning the bricks we found a complete rim and handle of an imported pilgrim flask, sending our pottery specialists into rapture! 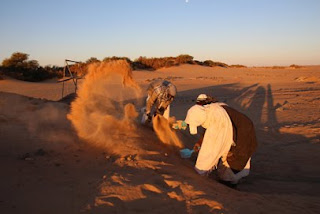 Fighting the spoilheap: removing sand to seek the ends of brick walls

The two walls are only half a brick wide in size but were at least three rows high, probably once higher as mortar for the next course is preserved on top. So far, no further structures are associated with these walls which makes it difficult to determine their function. It is quite likely that they were used to define space that was used as further garden areas or for keeping lifestock. These are important possibilities as we consider how parts of the ancient island was used beyond the houses, temple and official buildings.

Alongside regular updates on the blog, follow the season on Twitter: @NealSpencer_BM and #amarawest. For more images, visit instagram.com/nealspencer_bm