“Who was Nespeqashuty and how did part of his tomb end up in... 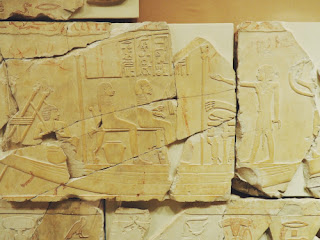 “Who was Nespeqashuty and how did part of his tomb end up in Brooklyn?”

When we think about art created during the Renaissance and after, we think about artist, subject, and story, essentially, people. Because the lives of Ancient Egyptians are so far removed from life today, the humanity of their art sometimes gets lost in the wonder of viewing it.

More than 2,600 years ago lived a man named Nespeqashuty (center). Part of his tomb is in the Brooklyn Museum’s Mummy Chamber. Looking at the reliefs and inscriptions, we know that he was a vizier, the highest ranking official in the bureaucracy. One of his minor duties was to serve as witness on documents such as the Saite Oracle Papyrus (one priest’s petition to work for a different temple) displayed in a neighboring gallery.

Nespeqashuty’s unfinished tomb reliefs reveal the process of two artisans differentiated by carving style. The vizier must have died suddenly at a young age or after changing his tomb’s location late in life. His ancestors were buried at Abydos. The unusual Theban location, amongst tombs of Middle Kingdom officials, suggesting Nespeqahuty’s affinity for the Middle Kingdom reunification of Egypt probably because Nespeqashuty served a pharaoh, Psamtik I, who is credited with a similar feat.

The tomb was excavated in 1923 by the Metropolitan Museum of Art. In the 1940s, a reconstruction of the relief blocks was attempted, but was unsuccessful due to missing pieces. The decision was made to deaccession most of them. In 1952 the Brooklyn Museum acquired much of the west wall and fragments of the east wall. One more piece was acquired in 1968 after Ernest Erickson, a friend of the Museum and collector, found it with an art dealer.