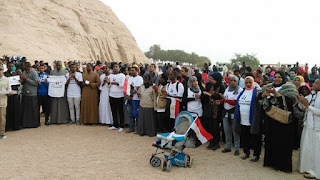 A group of Nubian citizens and activists protested Monday at Aswan’s Abu Simbel Temple, as hundreds of tourists gathered in the early hours of the morning to watch a unique solar perpendicular alignment illuminating the face of ancient King Ramses II.

“Around 50 to 70 people rallied for the cause of the Nubians, and security forces did not intervene against us,” said lawyer Muhammed Azmy, coordinator of the initiative and head of the General Nubian Union.

The protest condemns a presidential decree, referred to as ‘Decree 444’, issued in 2014, and passed by the House of Representatives last month. The decree designated a large stretch of land in Nubia as a new restricted military zone, adjacent to the Egypt’s border with Sudan.

According to Azmy, the decree obliterates the Nubian’s dream of returning to their home lands, from which they were displaced decades ago by the state to allow the construction of dams on the Nile. The return of the Nubian people to their lands is a right guaranteed by the constitution, he noted.

Aswan’s General Nubian Union said it specifically chose that day to attract worldwide attention to their “historical right to the property of the land”. To them, the area designated to be a restricted military zone is the exactly the land the Nubian people have been claiming for decades and hoping to return to, after they had been forcibly displaced from it in past decades to allow for the state to build dams in Aswan. In 1963, the construction of Egypt’s High Dam resulted in mass Nubian displacement.

“One day, the Nubian people were required to leave their houses and move away,”  Azmy said. “They were told that they would be doing this to support their country. They were promised compensations, and more importantly, a return to their home, none of which happened.”

What now angers Nubians most is to see those promises broken despite the latest Egyptian constitution passed in a public referendum in 2014 maintained the promise and outlined some guarantees for the Nubian people.

As of January 2016, two years have passed without progress. Moreover presidential decree 444/2014 designated several adjacent areas to Egypt’s borderlines to be restricted military zones. Concerning Nubia, that zone extends from the southern borders between Egypt and Sudan over 110km on the eastern side of the Nile and 25km on the Western side of the Nile.

Despite that the decree was issued over a year ago, Nubians were reawakened after the decree was approved and passed by the newly elected House of Representatives, during the 15 first days of its sessions in January 2016, in which the parliament was required to look at nearly 340 decrees issued in its absence that had the force of law.

Azmy does not see hope for further discussion of the decree in the parliament, especially amid being represented by only one Nubian MP. “If decisions related to the state’s sovereignty and national security issued by the president are a red line for the parliament, then what are MPs useful for?” he said.

The former ministry of Transitional Justice conducted many meetings and helped exchange points of views between the Nubian people and officials. “There were several draft law projects presented to the presidency regarding the resettlement of the Nubian people, all dismissed,” he told Daily News Egypt. “We decided to stand up for our rights before the decree enters into implementation in contradiction with the constitution.”

Azmy is convinced that the state’s intention from the beginning was to take over their land. “They probably needed our support to pass the constitution, resulting in the inclusion of article 236 but they were planning otherwise, even since the days of former president Hosni Mubarak,” he said.

The reason he provides is that the land, which included 16 Nubian villages, is rich not only in agricultural resources being located on the Nile but also in gold. “We will not wait until the area is closed for good,” Azmy said and who confirmed had been subject to threats by the security apparatus to call it off under the pretext of preserving the image of Egypt for tourists.