“So long as there is gold underneath, who cares about the dust... 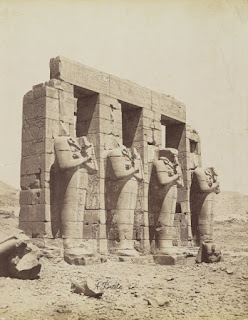 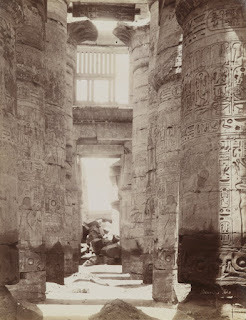 “So long as there is gold underneath, who cares about the dust on top?” ― Gustave Flaubert, Flaubert in Egypt: A Sensibility on Tour

Travel photography has come a long way since the early days of exploration in Egypt. Currently, the Brooklyn Museum’s expedition to the Precinct of Mut is transmitting a weekly dig diary full of lively photographs, along with news of discoveries and progress on the site.

Images delivered through the ether have their own unique excitement. We wish you were here and then—in an instant—there you are, standing beside the crew, gazing into a trench or kneeling beside a newly unearthed treasure. The perspective is personal—and your presence in faraway locales not an impossible dream—as scholars disturb the dust of this planet and uncover its past.

The Brooklyn Museum Library and Archives has recently acquired two rare albums of early Egyptian travel photos, many of which were taken by Antonio Beato (1830-1903). Operating in the late nineteenth and early twentieth centuries, Beato created detailed photographs of archaeological sites in Egypt and the Mediterranean. He also catered to the growing number of western tourists to the region, frequently assembling custom photo albums for travelers. Active for decades, Beato’s vision of Egypt became part of the standard imagery of the East as seen by the West.

These photos present a contrast to the modern style of travel photography and are a window into the unique sensibility of a turn of the century tourist.

Rather than being intimate and immediate like modern snapshots—Beato’s vision was monumental, mysterious and grand.  Although our newly acquired albums were created as one person’s travel diary documenting their own personal experience, each image radiates a feeling a vast distance. Landscapes, ruins and artifacts all communicate a strong sense of being separate or remote—in time, in space and in the knowledge of a culture that the west was in the process of re-discovering.

Although the places may be familiar, and much photographed in modern times, these travel albums preserve in a very unique way what a traveler of the time experienced when they visited Egypt, as well as the sites that were documented through photography. The resulting albums are of immense research value to many working today and in the future.

In time it’s likely that scholars of the future will study our own flurry of candid snaps and Instagram feeds – I wonder what these will say about us?